3 Genie Wishes is a 5 reel and 50 pay line best online slot sites by Pragmatic Play. Players will definitely enjoy a spin in this Arabian themed game where they get to enjoy features like free spins, sticky wilds, raining wilds (where wilds are added to the reels on each free spin), instant win pick prizes, stacked wilds, etc. Spinners also have the chance to land a win of up to 500x your bet, enjoy free spins where raining wilds occur throughout or have 6 free spins with sticky wilds appearing throughout. There’s a special bonus feature where a genie emerges from a golden lamp to award you wilds on each free spin round. So do you think the magical Arabian spirit will make your jackpot dreams come true? Stakes start from 50p to £250 a spin on all iOS and Android smartphones, PC and tablet devices. Discover more games like this one and other types of video slots below:

The action in 3 Genie Wishes Pragmatic Play is set against a gorgeous, sun-kissed, Arabian village as the backdrop. Enjoy great casino and slot promotions! You instantly get Aladdin, Alibaba and the 40 thieves and Paulo Coelho’s The Alchemist nostalgia all wrapped into one. Symbols on the reels include low-value card symbols A, Q, K, J, 9 & 10, parrot, a monkey, and 3 Arabian characters who offer the game’s top payouts of 150, 200 or 300 coins. The wild symbol in the game is represented by the genie symbol. The genie can substitute for all other symbols except the scatter symbol to award payouts of 20, 100 or 400 coins.

The genie wild can appear on the reels fully stacked to transform the entire reel into a wild reel on this paypal casino. The wild can appear on any of the 5 reels or on multiple reels on a single spin. There’s also a scatter symbol that’s represented by the magical golden lamp. It rewards payouts and triggers the Bonus feature in the game.

-Small Award - here it’s possible for spinners to win a payout equal to your total bet.

-Free Spins with Raining Wilds -10 free spins are awarded where a selection of wilds are randomly added to the reels on each free spin.

-Free Spins with Sticky Wilds – if you choose this option, you'll win 6 free spins. Wilds will be randomly added to the reels during each spin. When one lands, it remains frozen in place for the rest of the feature.

The reels will appear different in both free spin features, but the standard genie wild and the magical golden lamp scatter symbol are both eliminated from the reels. The wild symbols that keep hitting randomly serve as an adequate replacement though. However, the free spins feature can’t be re-triggered to offer more free spins. Play these online, and maybe slots you can pay by phone bill too?

About the Developer of 3 Genie Wishes Casino Slots - Pragmatic Play

Pragmatic Play is an online casino game provider that joined the industry in mid-2015. They’ve grown rapidly in terms of workforce and content seeing as they now have over 100 employees in less than 5 years of operating. They’ve also earned plenty of recognition among their peers as well as highly respected companies like Bally Technologies, Microgaming, NetEnt, etc. Pragmatic Play is a Malta-based company, so it’s no doubt that some of the magic from this gambling hub is rubbing off on the baby slot developer.

Surprisingly, Pragmatic Play has already had several award nominations and they’ve walked away winners from most. In 2017, they won the Software Rising Star award in a competitive category which included the likes of Yggdrasil Gaming and Elk Studios at the annual EGR B2B Awards. They also won Best Digital Company of the Year beating NetEnt and Best Gamified Experience Company and Best HR Director all in 2017.

It’s not all been smooth sailing as they’ve encountered a lot of near misses too. They were nominated for Game of the Year in both 2016 and 2017 for Hot Safari and Queen of Gold but they missed out. However, it was still a win in that it was proof that they produce high-quality casino slot games.

If you’re wondering about the legitimacy of the company, you should know that they have acquired gaming licenses from the UK Gaming Commission and the Malta Gaming Authority. These are two of the toughest gaming licenses to acquire. They’ve also been awarded a license by the AAMS in Italy, been certified by Romanian authorities, have Curacao eGaming certification and have a license awarded by Philippines' regulator, PAGCOR. They have a wide collection of online slots available to play. 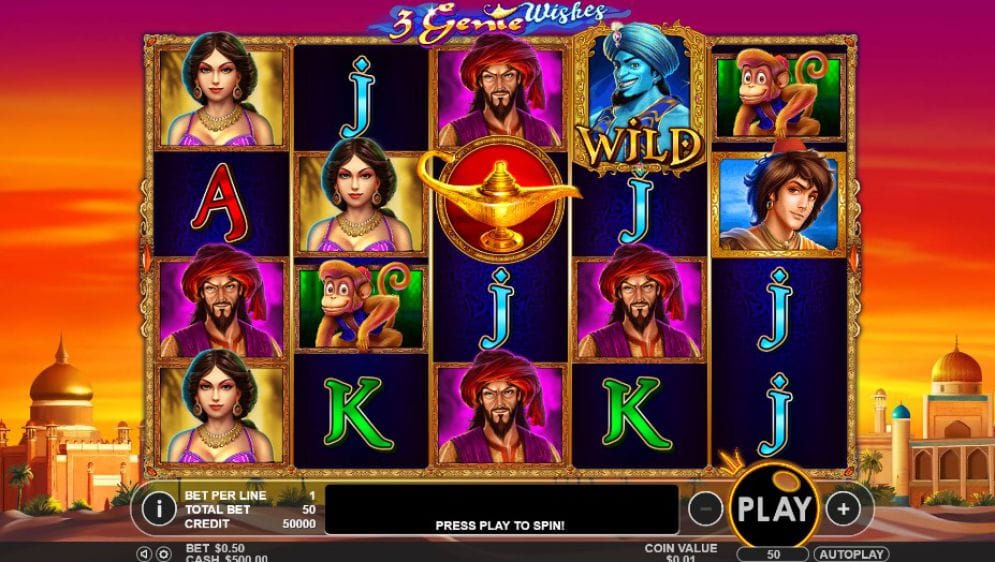 Final Review of the 3 Genie Wishes - Keep it or Leave it?

3 Genie Wishes is a good looking online casino slot games with cool cartoon style imagery backed by an awesome Arabian style sounding track which adds on to the amazing theme. Players will also enjoy the exciting features on offer. They are so well thought out, which is what you would come to expect from a company like Pragmatic Play. The range of wilds including; stacked wilds, raining wilds& sticky wilds will keep players locked on the reels, waiting for the next reel to turn entirely wild. And the payouts can be phenomenal after that. The instant win awards and free spins make where you can choose whether you want wild symbols to appear on the reels on each spin, make for pretty good ways of quickly stacking up that bankroll.

If you’re feeling lucky and Lady Luck is feeling generous, you could walk away having your Arabian jackpot dreams coming true. It’s a medium variance slot that counts as one of Pragmatic Play’s best slot releases to date. If you like this game then you will also prolly enjoy Luck of The Irish Slots too!