Welcome to Fluffy Favourites people, a online casino slot that is considered by many to one of the most iconic slot machines ever to have existed — which is definitely high praise coming from stagers you’ve never met, but trust us when we tell you that this slot definitely lives up to its reputation! Fans of carnivals and theme parks should have already played Fluffy Favourites by now, and if they haven’t then we are just going to assume they’ve been living under a rock…

Fluffy Favourites is a 5 reel by 25 payline sort of slot machine powered by iconic developer Eyecon. Playable on all devices from as little as 25p a spin, Fluffy Favourites is a slot that asks you to engage in a few carnival spins to hook big cash prizes. There’s a lot to unpack with this slot and we want to do it right, so be sure to check out the rest of the review down below!

Eyecon - The Developer of the Fluffy Favourites Video Slot

Eyecon has made a living from crafting stellar online experiences the likes you’ve never known! Founded in 1997, this computer game company quickly became one of the leading devs in the world with the release of their first hit slot machine, Temple of Isis, released all the way back in 2003!

It didn’t take long before the developer would land yet another hit in Fluffy Favourites, just three short years later. Since then, Eyecon has put out nothing but top quality content for punters across the globe to marvel at! We consider Eyecon to be on the Mount Rushmore of iGaming developers, and rightfully so, if you’ve ever played some of their titles!

In 2019, Eyecon have slightly shifted their attention, now focusing on the mobile gaming market, a market that is growing rapidly thanks in part to the success of games such as Candy Crush and Clash of Clans. Be sure to check out some of the following slots from the developer if you enjoyed Fluffy Favourites:

Many believe Fluffy Favourites to be the best slot that Eyecon has ever come out with despite it coming out over a decade ago — that’s right, punters still spin this slot in droves despite its age! Since the release of the slot machine in question, Fluffy Favourites, Eyecon has put out two sequels and one megaways version, all great additions to the franchise that all have steady player counts to this day also!

We’ve glossed over this at the top of the review, but allow us to go into more detail on the theme of Fluffy Favourites. This slot takes place within a carnival game of some kind, one that you must spin in order to win some of the various stuffed animal toys you see appearing all over the reels here. Every icon you see offers something different in terms of scores, with the pink elephant being the most desirable of the bunch — we’ll get into why that is a little bit later on…

To play one must first input a bet amount of some kind, this is easily achieved through hitting certain buttons that you see on the bottom of the reels. Hit the right button to raise the bet, and the left one to decrease it — once you’re happy all you need to do then is hit spin and get ready!You only need three icons to create a winning combination here, although finding five will grant you a much higher score, but we didn’t need to tell you that!

The look and feel of Fluffy Favourites might seem dated to those who are used to the bright and glitzy impact of new slots that are coming out from Eyecon, but that isn’t to say that you can’t enjoy the simplicity on offer here! Eyecon did an incredible job in creating a hazy sense of nostalgia in how the symbols/background look here — we could sit and stare at this slot for hours without getting bored, it’s like looking at an old Beanie Babies collection. At the bottom of the screen is where you’ll find the autoplay mode, a mode that should require no explanation if you’ve played an online slot machine before.

Those out there playing Fluffy Favourites for monetary gain, should always, always, always want to be utilising the bonus features that this slot has from the offset and throughout. Wilds, scatters and free spins make up the most common of all bonuses in Fluffy Favourites. Wilds will substitute symbols across the board. Free spins are unlocked through the matching of scatter symbols, free spins come with multipliers, that is why they are so desirable in the heat of play! Find slots bonuses!

The toy box feature is the cream of the crop as far as bonuses go, this bonus will have you taken to an alternate screen where the player must play a game. Simply play the game and uncover one of the many multipliers that are hidden behind some of the cuddly toys to win. The multiplier you earn here is completely random so you definitely want to be accessing this feature as much as possible to see what the other outcomes will be! Play Chilli Heat slot on Slots Racer! 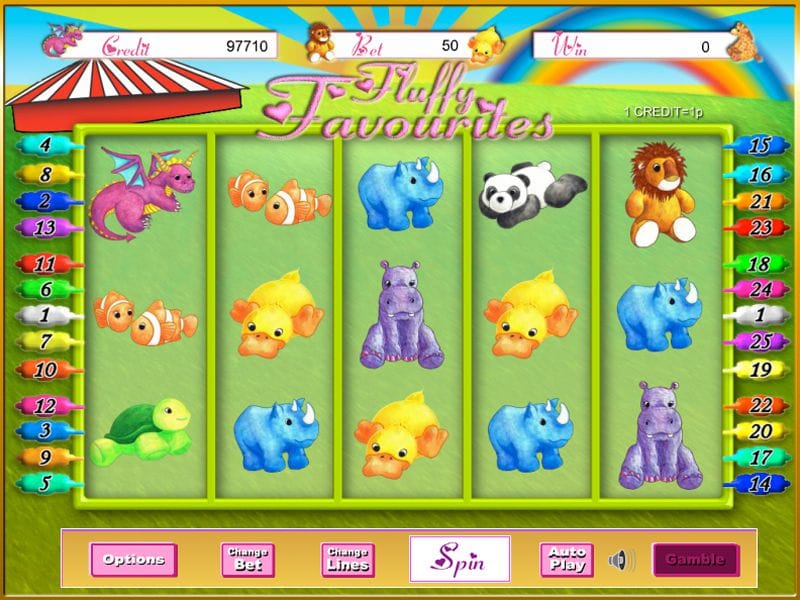 Taking a nostalgia trip has never looked so good, Fluffy Favourites has more than earned its status as one of the very best online casino games circulating right now! This is a slot that has been around since 2006 and is still played by tens of thousands of people on a regular basis, isn’t that just crazy?!? Why not go see what all the fuss is about, there’s money to be made and stuffed animal toys that need a home, so what are you waiting for?