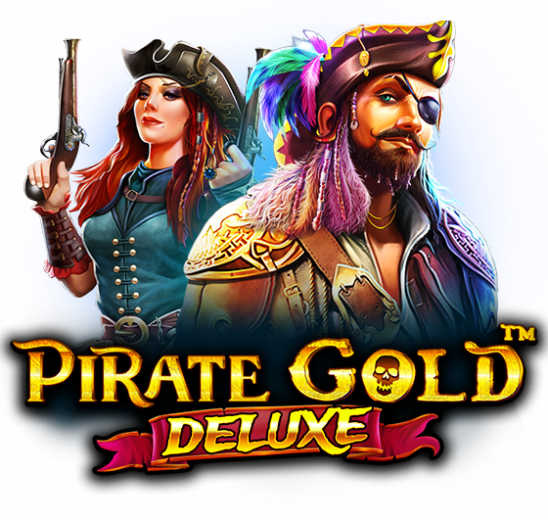 If you like to sail tumultuous seas in search of scintillating treasures, you’ll like Pirate Gold Deluxe here at SlotsRacer.com. Introducing some new features to a game that demanded a sequel, this is truly a deluxe that does more than just repackage the original.

Keep reading to learn everything there is to know about this casino slots brought to you by the stars of Pragmatic Play.

Pragmatic Play are a leading provider of slot games. Priding themselves on their immersive player experience, they make slots that drive you to play for more than just the sake of gambling. Slot machine games like Pirate Gold Deluxe hold your attention hostage for how absorbing their features are.

Pragmatic Play are the guys that brought you classics like Bingo Blast and Sweet Bonanza. Many of their slots are mobile-focused, allowing you to take their gripping gambling games anywhere. When you play casino slots Pragmatic Play style, you play whenever you feel like it.

Being one of the best slots sites on the internet, you can find Pragmatic Play’s quality slots all over our website: 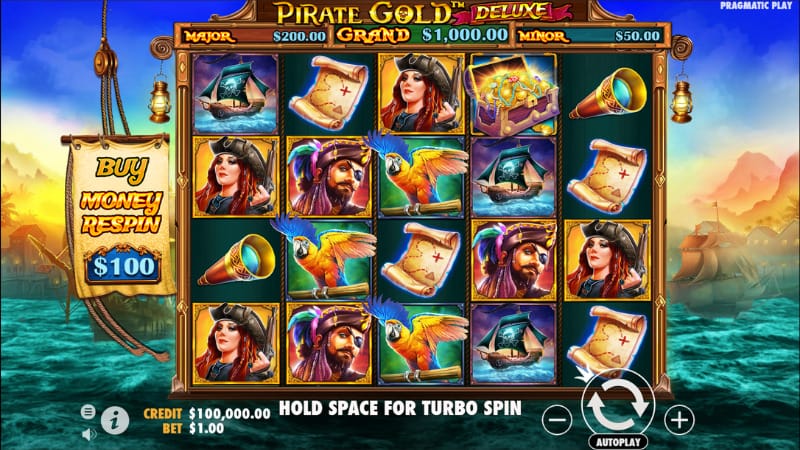 Pirate Gold Deluxe has quite similar visuals to its predecessor. The Deluxe does have more aesthetic environment due to its brighter, warmer, more vibrant colour palette. But its pretty much the same design, and the same can be said about the suspenseful audio.

Pirate Gold Deluxe’s symbols include: gold, silver, and bronze coins; hook hands, telescopes, treasure maps, pirate ships, parrots, female pirates, and male pirates. The male pirate is the highest value symbol, paying as much as 12.5x your stake if you’re lucky to land 5 on a payline.

Pirate Gold Deluxe’s minimum bet is 20p, maximum bet is £100, and maximum win is 15,000x with a fruitful RTP of 96.45% at a high volatility. Being one of the best slot sites, you can play the slot on mobiles, PCs, and tablet. And for more pirate themed slots, check out the Pirate Gold slot and Pirates Frenzy slot. 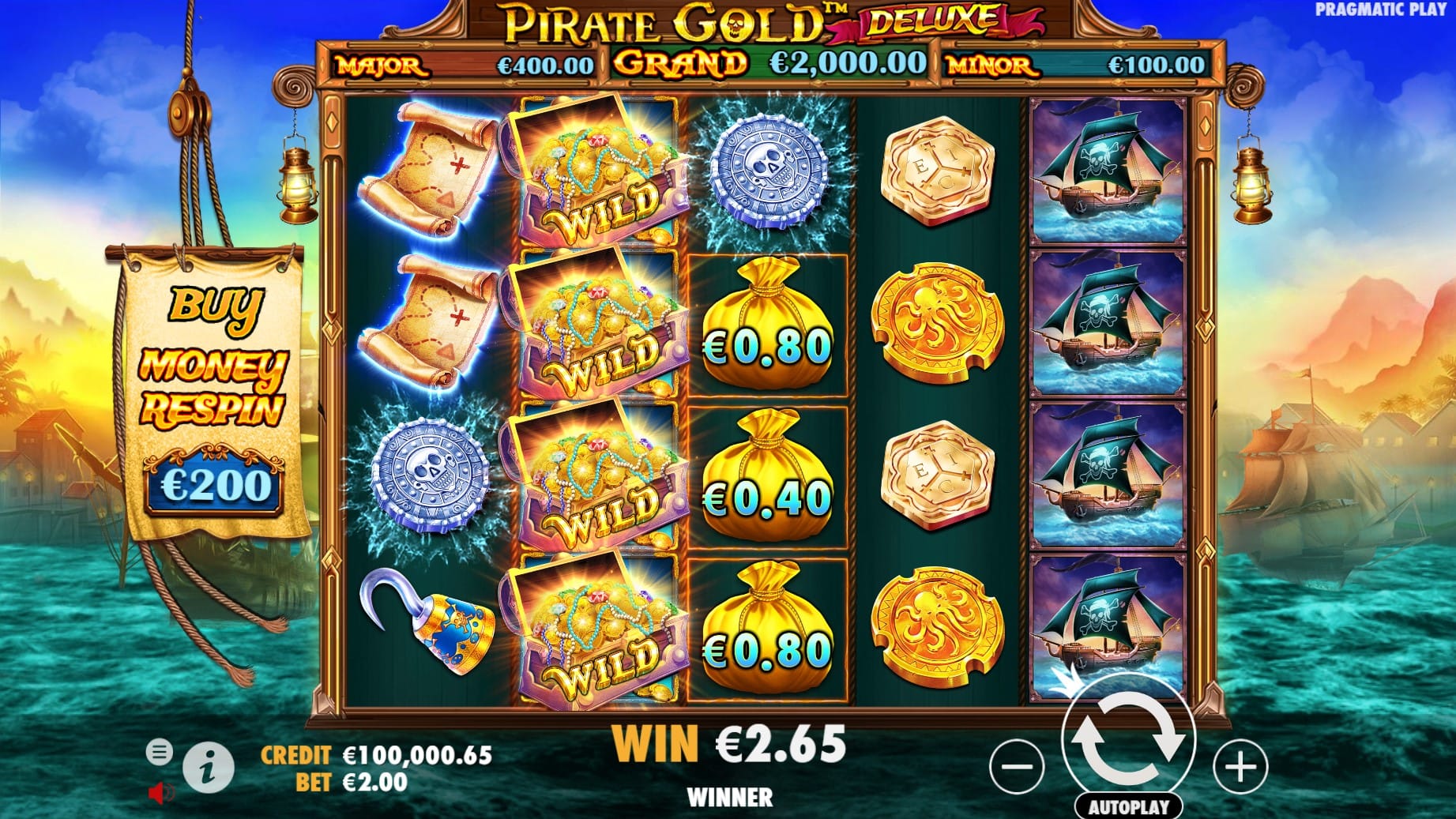 In Pirate Gold Deluxe there’s luckily a few bonus goodies. Firstly, the treasure chest full of loot is the slot’s wild, meaning it can shapeshift and substitute itself for other symbols if that would form a winning combination. Cool!

Secondly, there’s quite a comprehensive Lucky Treasure Bag feature. Here, money bags deliver cash prizes, multipliers, and a trio of jackpot prizes. This feature is triggered by landing 8 or more gold moneybag symbols anywhere in the same spin. The bags lock in place and you’ll be awarded 3 respins, and every time a new money bag lands these reset. 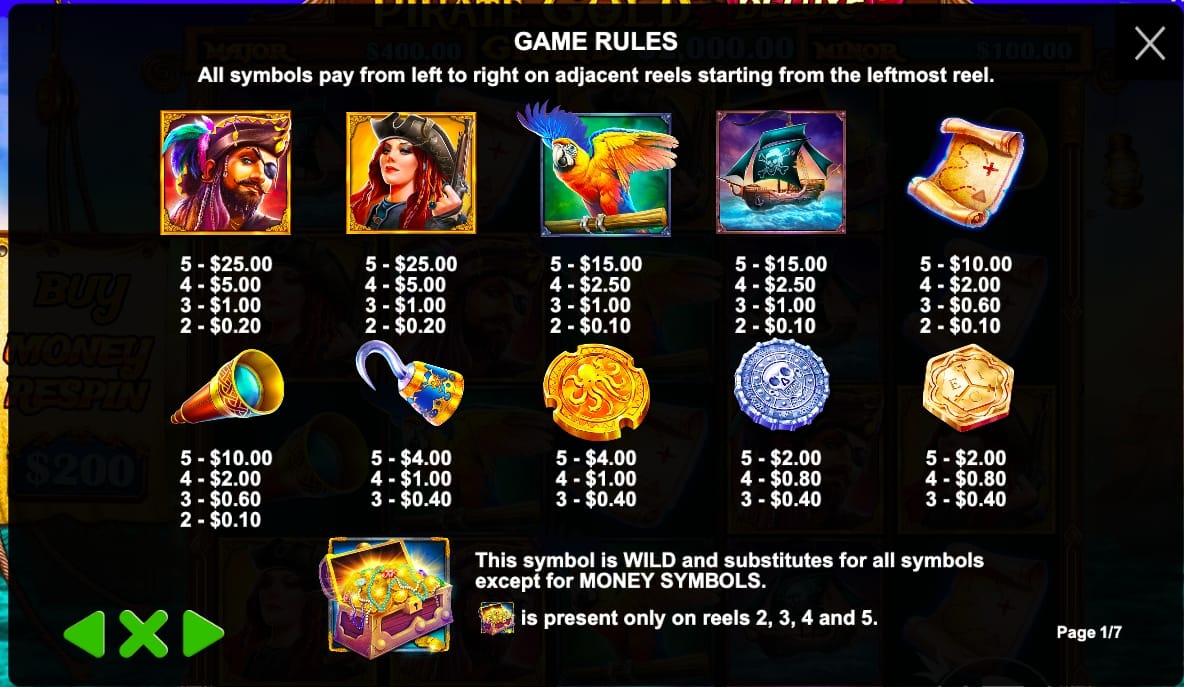 Pirate Gold Deluxe is a deluxe that does introduce some new features and doesn’t just slap ‘deluxe’ on the title. However, the top payout of 15000x is much lower the 32k seen in the original, and this may feel like too far a dip for some. Overall, we think it’s a decent game just like the Path of Destiny slot.