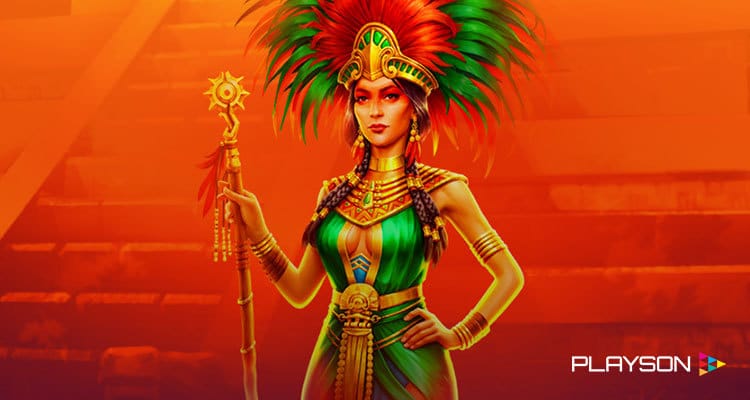 The latest offering from Playson, developers of some of the slots online, is Solar Temple, an exciting Aztec-themed online slot machine hosted by one of the top slot sites - Slot Racer. Released in April 2020, Solar Temple is bound to appeal, whether you’re looking for historical theming, vibrant cultural aesthetics or simply bathe in the Mexican sun.

While the Return to Player rate comes in just below average at 95.22%, there’s no shortage of winning potential, as if multipliers are activated, punters could be looking at a 20,000x win. There are plenty of free spins to pick up too, so the potential to cash in looks promising.

Stake as little as 20p, or up to £100, and immerse yourself in a bright, colourful playing experience with loads of great features and huge pay-out potential. Although there isn’t a progressive jackpot in this particular online slot machine, which may put off some punters, Solar Temple is incredibly accessible to newcomers plus contains a wealth of extra features, such as sticky wilds, that will keep the more seasoned gambler interested.

Read more below or discover online casino slot games and play them today!

About Playson - the Pioneers Behind Solar Temple

The guys who bought you ‘Solar Queen’, Playson, rank among some of the best online slots developers in the game. One of their stronger points is their ability to conjure up some impressive, unique bonus features (such as the ‘Flaming Frames’ feature in Solar Temple), in exciting and engaging themed contexts.

We loved Solar Queen, and Temple of Iris Slots, which provides a similar gameplay experience overall. That being said, personally, the Aztec theme of Solar Temple just about pips it for us in terms of pure gameplay enjoyment. Playing Solar Temple When you get started with this game, you’re looking to load up the five reels with as many Sun icons as possible.

You’ll have blocks of 10 spins at a time, and will collect ‘Flaming Frames’ along the way. These turn into the aforementioned sticky wilds, to use on your last block of spins. To get more more out of the game, you’re going to want to land the Sun icons in the same position as many times as possible, with an aim to establish the 10x multiplier.

On the last block, this is where you can achieve the jackpot. As the games graphics processing is fairly low, it’s more accessible across the board with devices. This means that you can play if you’re on a laptop, PC or even an Android or iOS tablet or smartphone should you prefer the mobile gambling experience. Play their games with some of the best slot offers in the iGaming market. 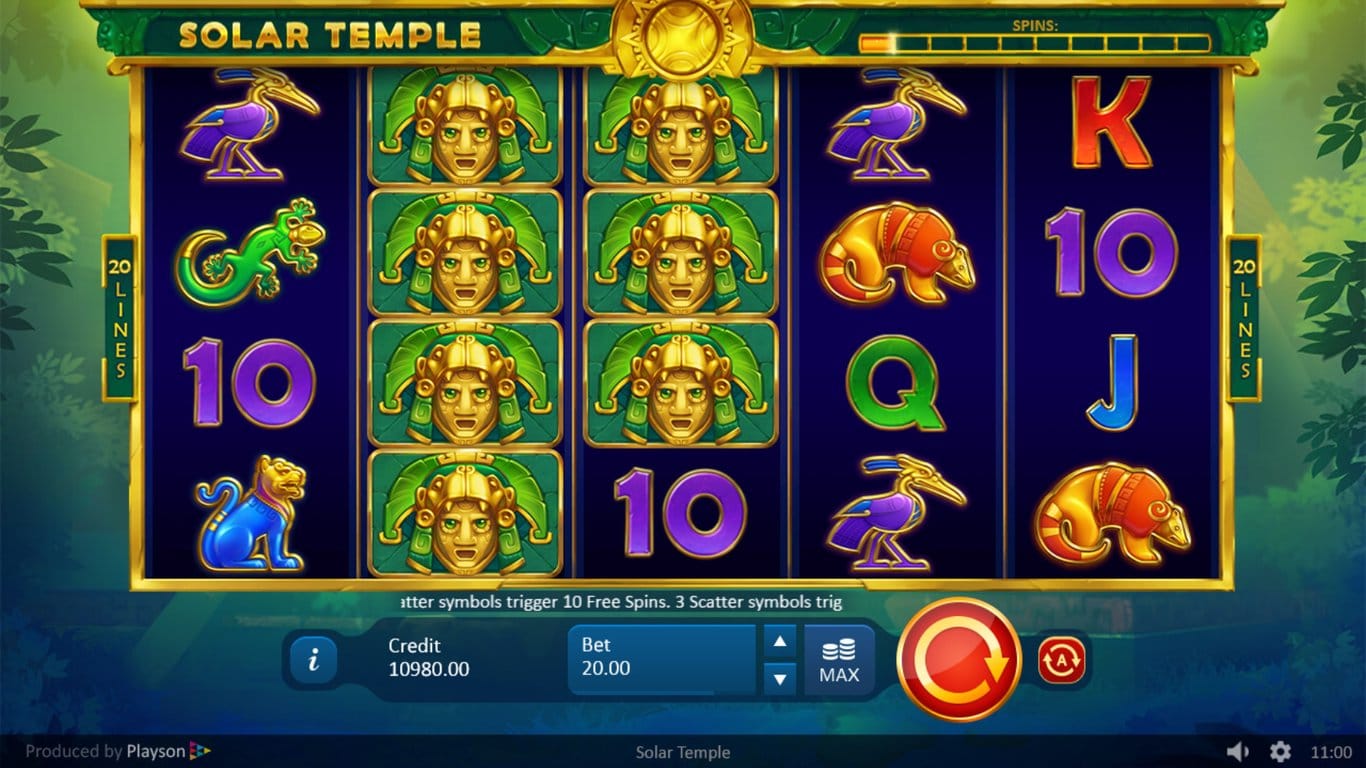 Catch on fire with the ‘Flaming Frames’ feature, undoubtedly the best part of Solar Temple videoslot, offering a wealth of wilds. To achieve multipliers, you’ll have to land these wilds on the same frames as many times as you can, with a view to get as close as possible to that 20,000x maximum win. On top of this, you can get hold of free spins along the way.

To achieve 10 of these, you’ll have to line up three Aztec temple scatters, appearing as golden temples. The 10 free spins will come in the form of a bonus round, enhancing the potential for a bigger win. Our Take on this online slot In a year where we haven’t had much opportunity to go outside, online slots have become more prominent than ever.

Because of that, the competition has been fierce. We’ve seen some top online slots games this year, and Solar Temple certainly ranks among them. Although the graphics aren’t fantastic, the theme is intriguing, and most importantly, the payout potential is very desirable.

The part that impressed us the most, however, was the ‘Flaming Frames’ feature - one of the most innovative features we’ve seen, bearing some of the best slots games on the market for intuition. We’d recommend this game for the more intermediate player.

Although it’s accessible and engaging, the high variation may be off-putting for the beginner, and on top of this, the lack of a progressive jackpot may put off the veteran punter. Deposit and play here. 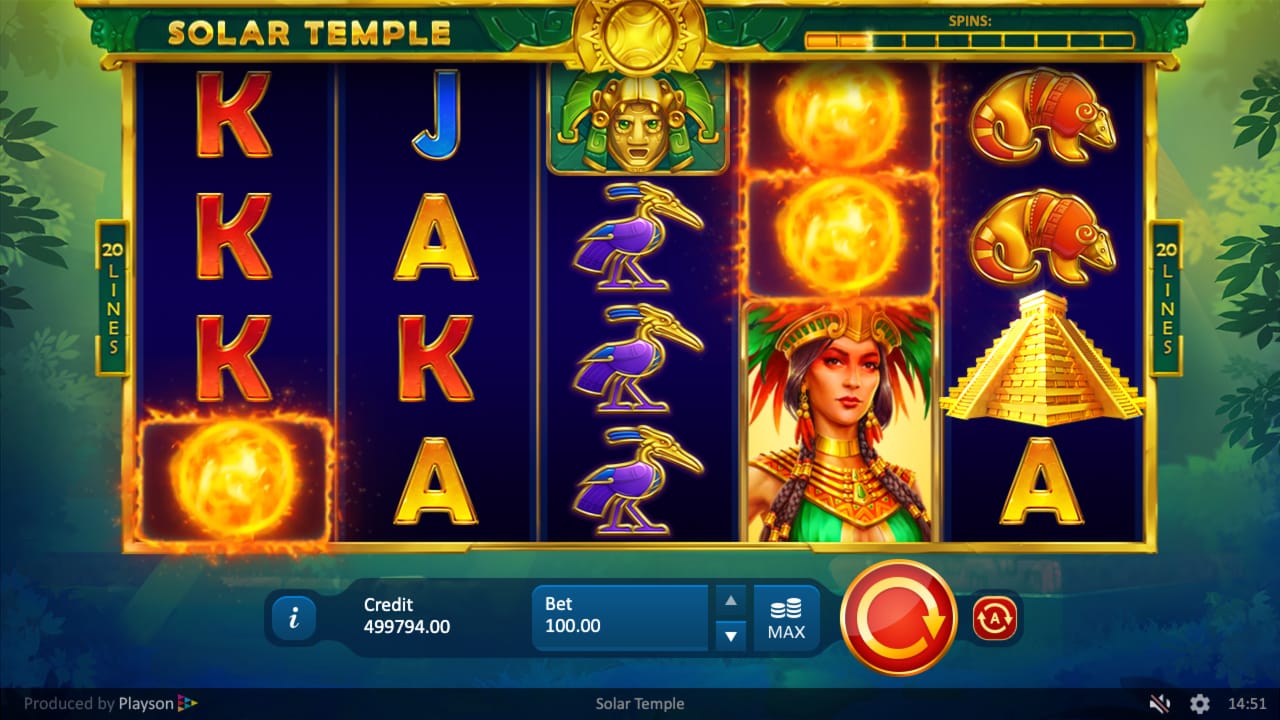 Slot Racer has established itself over the years as one of the best slots sites going, consistently bringing in some best online slots on the market.

Once again, they’ve chosen wisely by collaborating with Playson on Solar Temple. Other games by the same developer team include Wizard of the Woods slot!