If you have got a sweet tooth, then the Sugar Train new slot machines from Eyecon might just be perfect for you! Hop aboard the train and embark on a journey full of all manner of colourful sweets and candies of the tastiest kinds. Sugar Train is set in a mouthwatering fantasy land where the place of trees is taken by lollipops, and the hills are made of giant candy pieces and frosting!

To learn more on these casino slots check our full review below, or try one of the video slots below:

Eyecon is a game development company that was birthed over two decades ago in 1997. The company first started as a computer game company before it's owners started looking to expand into making an online casino system and gambling games in 1999. In 2003, the company successfully launched its maiden slot game, known as the Temple of Isis, a game that has remained popular till today. After that, the game development studio went further to create more and more exciting games that players find irresistible and addictive.

At present, the gaming company's portfolio is made up of more than 60 games, each one having something different to offer and also available on paypal casino. Eyecon’s game studio is located in Brisbane, Australia, which is the birthplace of many big game studios. Eyecon's Brisbane office is focused primarily on the technical aspect of the company's business, and it’s also the place where they bring their games to life. The company also has a business development office in Guernsey, which handles aspects, including marketing, CRM,  sales, and business development.

Eyecon, as a gaming company, believes that its vast portfolio of games has something for every player, whether you like simple games, action-packed games, and virtually any kind of theme players can imagine. The company's portfolio also made up of a mix of bingo games, casino games, lotto games, and a few table games as well. When it comes to started of design,  expect for best from Eyecon games are they are mostly designed using 3D animations and captivating features. Other casino slots games from Eyecon include:

How to Play Sugar Train Slots

Sugar Train is a casino game that has five reels and three rows nicely framed in candy canes. Each spin has 25 lines, which are quite flexible, as it allows players to choose how many lines they want to play with. If a player decided to reduce the pay lines to just one, they are free to do so; the trick about playing with lesser lines is that it will allow players to place smaller bets.

As for the slots offers that are available in the Sugar Train video slot, they include a Rainbow Pick Bonus, a Gumball Bonus, a free spins bonus that carries up to 25 free spins with it, and also a wild symbol that changes symbols and doubles wins as well!

The sweet symbols that players will see in Sugar Train casino slot games include gummy frogs, Sugar Train candy bars,  gummy hearts, chocolate bars, gummy bears, donuts, lollipops, gumballs, toffees, and cupcakes. The yellow gummy bear not only looks tasty but also serves as the wild symbol in the video slot, substituting any other symbol apart from the rainbow scatter and going further to double any wins it becomes a part of.

The sugar train free spins bonus will be triggered whenever three or more gummy bear scatters show up anywhere on the reels. The Free spins in this game are awarded as follows:

During the bonus phase, players can retrigger free spins up to 15 times max.

The Gumball Bonus is another one that players love. This feature can be triggered when the red indicator gets the top of the wigwag at the right side of the reels. A train will drop new carriages beneath the reels, leaving a claw machine to pick out five random gumballs from the train. Individual gumballs can give a prize of 100x your total bet amount! If the claw does not drop a gumball, players will get the reward! There is also the chance to grab up to 500x your bet amount in this bonus round.

The rainbow pick bonus is triggered when three or more rainbow scatters show up anywhere on the reels and on the same spin. Players will now be allowed several picks depending on how many scatters triggered the bonus round, as follows:

Each pick in this bonus round can reveal a gift of up to 100x your bet amount, and in the end, all the prizes shown will be summed up. Players can even trigger the rainbow pick bonus during the free spins!

In Sugar Train, when players match two to five symbols of a specific kind on an active pay line, they will earn a prize. Matching symbols are required to land on adjacent reels and in a left to right order before it can count as a winning line. Also, symbols that pay lower pay from at least three identical symbols to combinations of five of a kind.

The Sugar Train candy bar offers players 10 coins for 2 symbols, 100 coins for three spins, and a grand prize of 5,000 coins if a player gets five of a kind!

Next in line is the gummy frog, which is worth payouts starting from as low as 5 to 1,000 coins. For the gummy heart and the gummy bears, they are worth between 2 and 500 coins. Then the chocolate bars and the sweet doughnuts are considered average value symbols as each one is worth between 10 and 300 coins for displays of three to five of a kind. Finally, the lollipops and gumballs each pay a player up to 200 coins, while the cupcakes and the toffees pay up to 100 coins each.

Sugar Train is perfect for people who love colours because it is a colourful rainbow. You can consider its appearance a brilliant work of art.  The reels are framed in white and red sugar canes, and the background has green hills that are full of popsicles, gummy candies, lollipops, and even giant-sized cupcakes! The sky into this game is a bright blue colour with just a few white clouds gently floating above the hills and creating a happy atmosphere.  Overall, you'll find this slot charming with all manner of delicious looking sweets and candy on the reels and everywhere!

Players will also find the Autoplay button and bet settings on the reels, and the paytable can be reached from the game panel located above the reels. Play Sugar Train mobile slots now! 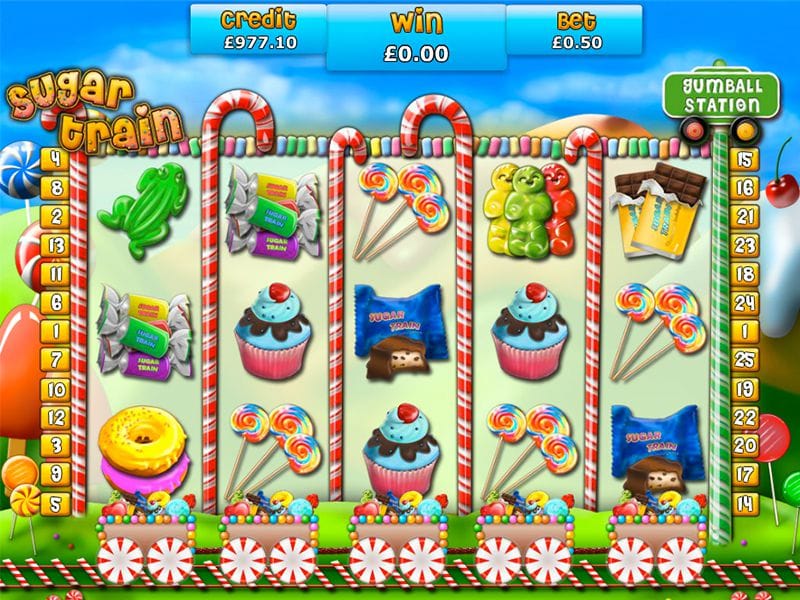 Last thoughts on Sugar Train - Should you play this Game?

Sugar Train is the right UK slot game to play if you are one of the thousands of people who love all things delicious and colourful. It is also an advantageous and straightforward slot that both professionals and first-timers will enjoy.