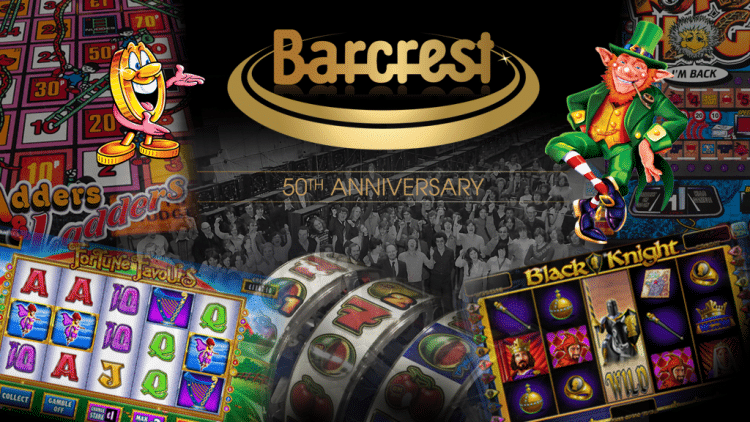 Rainbow Riches is a beloved series in the online slot machine community. The fact that it has emerged as such a successful series of casino slots with a consistent lucky Irish theme is testament to its developer, Barcrest, which has been incredibly influential in the slot game arena over the last fifty years.

While the bonus features and free spins of each Rainbow Riches slot have developed and varied over the years, the games offer a consistent theme consisting of peaceful meadows and lucky Irish charms. Having its foundations in an earlier era of online fruit machines, the Rainbow Riches slots use retro-looking symbols along with vibrant colours which are indicative of a classic game design. With rolling hills, blue skies and rainbows typically providing the backdrop, Rainbow Riches slots are the perfect games to chill out to. Their designs will also help keep you calm if things don’t go your way for a while! Their soundtracks are generally minimal but feature all the jackpot sound effects we know and love, making those wins all the more satisfying. Quirky characters such as the lucky leprechaun and a magic fairy bring some extra charm to this Gaelic delight. What’s more, these characters are implemented very nicely into the myriad of bonus rounds which feature across these online fruit machines. The leprechauns and fairies serve a purpose in the execution of these rounds rather than just being there purely for decoration. Learn more about these real cash slots below!

What are the Origins of Rainbow Riches Casino Slots?

The Rainbow Riches family is brought to you by Barcrest, a developer we here at Slots Racer cannot say enough good things about. Barcrest predate virtually all the other developers you will be aware of producing online fruit machines today, as they were founded back in 1968. Their humble beginnings began in Manchester in the UK with just two employees, before they began to pioneer casino hardware development in the 1990s. Barcrest was purchased by International Game Technology in 1998 in a high-profile £42 million deal, which clearly reflected the success they had enjoyed up until that point. Those reels kept on spinning and Barcrest is now a subsidiary of the Scientific Games Corporation, having been acquired by them in 2011.

Barcrest has successfully brought the Rainbow Riches series to the online slots sphere in recent years, but Rainbow Riches in fact began in 2006 as a land-based fruit machine across pubs and bingo halls around the UK and continental Europe. This really gives Rainbow Riches an authentic feel and allows the player to feel connected to these retro fruit machine roots while spinning away online. If you still are not yet warmed to the brand, Barcrest impressively celebrated its 50th anniversary back in 2018, and is still operating in the local Manchester area where life began all those years ago. Learn more below, or play video slots now from our collection at Slots Racer

Land based versions of the original Rainbow Riches slot game have been seen with a very simple 3x3 slot reel, but the online version of the original Rainbow Riches uses a 5x3 set of reels, in addition to offering 20 pay lines. The RTP is 95%, which is a little on the low side and is thankfully something which is improved in more recent editions in the series. Despite that, with its medium variance it offers a nice max pay out of 500x your stake. The original Rainbow Riches is a simple looking slot, offering the trademark vibrant colour scheme which is utilised in later editions. Your favourite leprechaun features here for the first time as the face of Rainbow Riches, and he is the face of Bonus Leprechaun symbols which trigger the Road to Riches bonus feature. The luck o’ the Irish theme is quite soft in this original slot, as it is in the other subsequent online fruit machines in this family. As a result, we feel it is a well-executed theme as it gives these casino slots a bit of personality without being over-bearing – it’s still all about the prizes!

Casino slots are all about their bonus features, something which older slots can sometimes be slightly lacking in. The original Rainbow Riches online slot machine holds up well in this department, however, and features a number of bonus features which paved the way for subsequent use in later additions to the series.

The Road to Riches bonus feature kicks things off well with an exciting top prize and a great name – who doesn’t love a bit of alliteration? Landing three or more Bonus leprechaun symbols anywhere across the reels activates this bonus game – told you he was lucky! The screen changes entirely at this point as you are jetted off to a hilly path with a stunning mountain backdrop. Along the path are vibrant toadstools along with the elusive pot of gold at the end of the rainbow, which arches over the mountainside. For a simple and fairly retro slot to some extent, this bonus feature adds a really nice extra element to the game visually, and some added scenery is always extra nice when it’s set in the Emerald Isle.

Of course, it is not all about tranquil scenery, there are multipliers to be won! These increase up the path from x1 all the way up to 200x. The leprechaun spins the wheel for you to decide how many steps you take up the path. The ideal scenario is to make it all the way to the top where the 200x multiplier awaits. Your chances aren’t too bad, as you will continue your hike up the hill until the spinning wheel lands on the ‘Collect’ segment, at which point you will take away your hopefully plentiful winnings.

As you will have picked up by now, the original Rainbow Riches slot game is not the only one of its kind here at Slots Racer, in fact far from it! As well as putting out new games, the series has successfully incorporated bonus features from the original into its later editions. For instance, the Road to Riches feature went down a storm with players and was utilised again in Rainbow Riches: Pick N Mix, an entertaining sequel to the original slot game. The Pick N Mix edition of the Road to Riches bonus uses more or less the same concept as the original but with a few added features. First of all, we have a little update on the graphics of our leprechaun friend, which we are sure will give him the motivation to put a bit of extra luck into your wheel spins. Another update is an increase the jackpot, with 500x your stake up for grabs. Finally, a wonderful addition is the opportunity to win the maximum stake without even needing to put your walking boots on! Landing five Road to Riches symbols straight off the bat will see you land the top prize of the cash path without even needing to play the bonus feature. 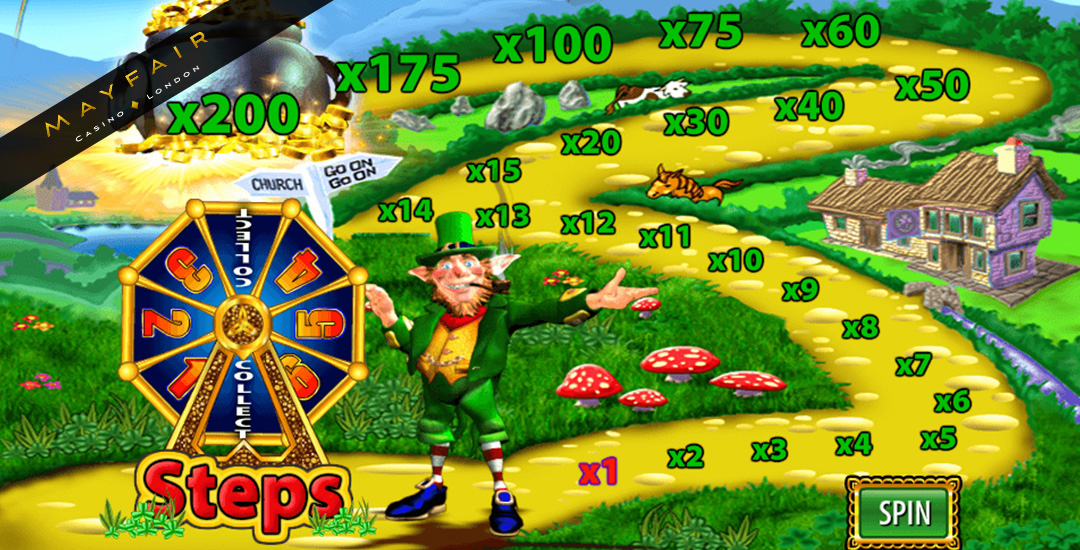 Online fruit machines have to adapt over the years in order to stay in tune with the latest developments and keep slots aficionados coming back. Rainbow Riches does this masterfully, incorporating various exciting new bonus features into its games to complement the cohesive design and theme which runs throughout each game.

A similarly striking visual feature is utilised in the Rainbow Riches: Drops of Gold online slot machine. A rainbow path ascends above the main slot reel and contains various silver and gold pots which can drop onto the reels when you land a Drops of Gold symbol on the fifth reel. This feature really adds a new dynamic to the game design in addition to providing opportunities for extra wins, as those silver and gold pots are wild and therefore substitute for other symbols to create those juicy winning combinations.

Rainbow Riches Megaways will leave even the most thrill-seeking slots player looking like they’ve just fallen out the eye of a storm. This casino slot of course uses the famous Megaways feature, whereby the number of symbols across the reels vary with each spin, ensuring an electrifying slots experience. Truly upping the ante, however, is Rainbow Riches Megaways’ incorporation of cascading reels into the mix. This in conjunction with Megaways is an extreme mix and means there are 117,649 possible winning methods. The RTP also sits at a solid 96%, so there are no problems there either.

The cascading reels work the same way they do in other casino slots you will have played, particularly those pioneered by NetEnt such as Gonzo’s Quest. Whenever you land a winning combination, the winning symbols are removed and leave gaps for new symbols to take their place. If the new symbols also make a winning combination, you’re in luck! What’s more, the cycle continues infinitely until your wins reach an end, not bad!

A common feature across the Rainbow Riches series and one which Barcrest has become known for is the Big Bet feature. This feature is accessible in Drops of Gold, Rainbow Riches Pick N Mix and Reels of Gold and essentially consists of a segment of five spins at a fixed ‘big bet’. The potential wager you can choose increases from £20 a spin up to £50, and you will receive an increasing number of pay lines depending on the stake. Furthermore, in Drops of Gold, this feature utilises the extra rainbow feature by adding more wild pots to it.

Another important thing to note is that throwing your hat into the ring with the most expensive Big Bet options also increases the RTP, due to the increased number of pay lines. For instance, with Rainbow Riches: Drops of Gold the RTP increases considerably from 94% to 97.75% if you decide to play risky.

Last Thoughts on the Legacy of Rainbow Riches Casino Slots

Here at Slots Racer pay by phone casino, we are partial to a good sequel when the demand is there for it in the online slot games community. Slot game sequels pop up fairly often, namely Dead or Alive II and Blood Suckers 2. To execute a whole family of slot games, however, which have time and time again pleased online fruit machine fanatics with brilliant bonus features and charming visuals, is an even greater task. For this reason, the original Rainbow Riches online fruit machine has become something of a cult classic, while its subsequent titles are enjoyed widely for their updated graphics and bonus features. The consistent Irish theme is one to be celebrated, as it is always executed smoothly. There is nothing like some lucky Irish charm to put a wee wry smile on your face and a bit of fire in your belly as you tackle those slots in search for some gold coins.

Of course, as with any casino slots, there are downsides to some of the titles, namely the low RTP in the original game. However, across the various incarnations of Rainbow Riches there is such an impressive variety of bonus rounds to enjoy, which ensures that each and every game has something new to offer, whilst drawing upon successful features of old. Due to this appeal, in addition to the rich history of Barcrest who developed Rainbow Riches, this family of games is bound to hold a very well-regarded legacy and continue to be a fan favourite for years to come.