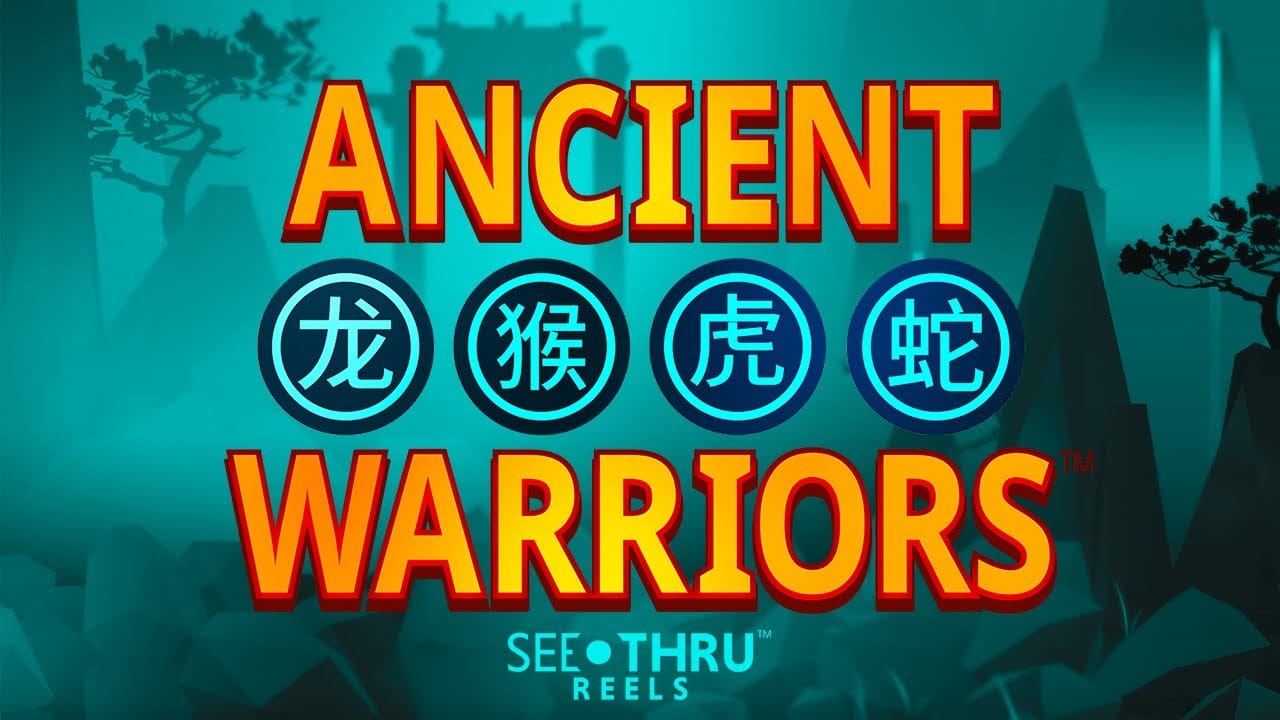 Get to the territories of the enemy in Ancient Warriors and conquer them using some proven Asian war tactics. Ancient Warrior is yet another result of the collaborative efforts of Crazy Tooth Studio and Microgaming. As one of the video slots online from this collaboration, the game is imbued with the See-Thru reel setup.

The graphics are properly done to entertain all classes of online slots players, as the warriors exact their strength on the reels. The game has the Stacked Multiplier feature, where you have the Feature symbol performing some awesome tricks. The feature offers you wild multipliers with values ranging from 2x through to 10x your wager.

The Ancient Warriors Free Spins awards 5 initial free spins and extra free spins of up to 10. Playable on 4 reels, 6 rows, and 50 pay-lines, you have a maximum 1,807 times your wager up for grabs.

Join us as Slots Racer, one of the best slots sites, for slots offers more details below.

Ancient Warrior comes from the partnership between Microgaming, a software giant, and Crazy Tooth Studio, a budding slots game developer.

Headquartered in Navada, Crazy Tooth Studios was established in 2011 and has interest in taking the industry to a new level. Its team has come up with astounding game mechanics for most of its titles in the market. The company’s efforts at becoming better with every release is exemplified by its catchphrase “Quality Always wins”.

So far the company has mostly developed best online slots, some of which are as follows:

The following games and most other best slots to play from Crazy Tooth Studios are available on Slots Racer. 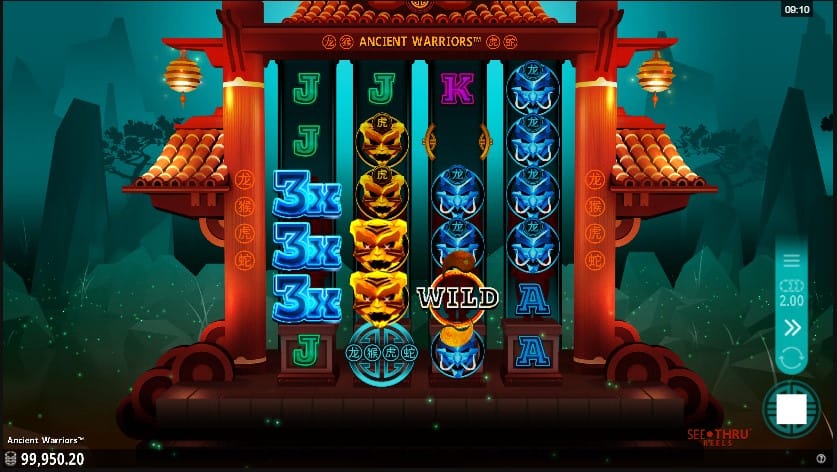 Ancient Warrior pay by phone casino slot is designed to play on the See-Thru Reels mechanics. It also comes with the Any adjacent pays mechanics that has winning combinations being formed from the second reel.

So expect that your wins may not start from the first reel when you land 3-of-a-kind combination. Ancient Warriors boasts the Stacked Multiplier feature that offers multiplier values between 2x to 10x your bet. The Ancient Warriors Free Spins feature offers free spins and extra free spins which can be up to 10.

Both features, when played well, offers you a great chance to land the highest payout of 1,807 times your stake. The more rewarding symbols here are Asian-styled Cat, Snake, Dragon, and Monkey. The lesser rewarding symbols are card suits such as J, Q, A, and K.

The Yin Yang is the wild symbols that takes the place of all other symbols when forming winning combinations. The only exception to this is the scatter symbol, which is the gateway to the Ancient Warriors Free Spins feature.

Between 20 pennies and 115 pounds will entitle you to join other warriors in spinning the reels. Slots Racer provides you more robust presentation of the gameplay, so play now to get it. 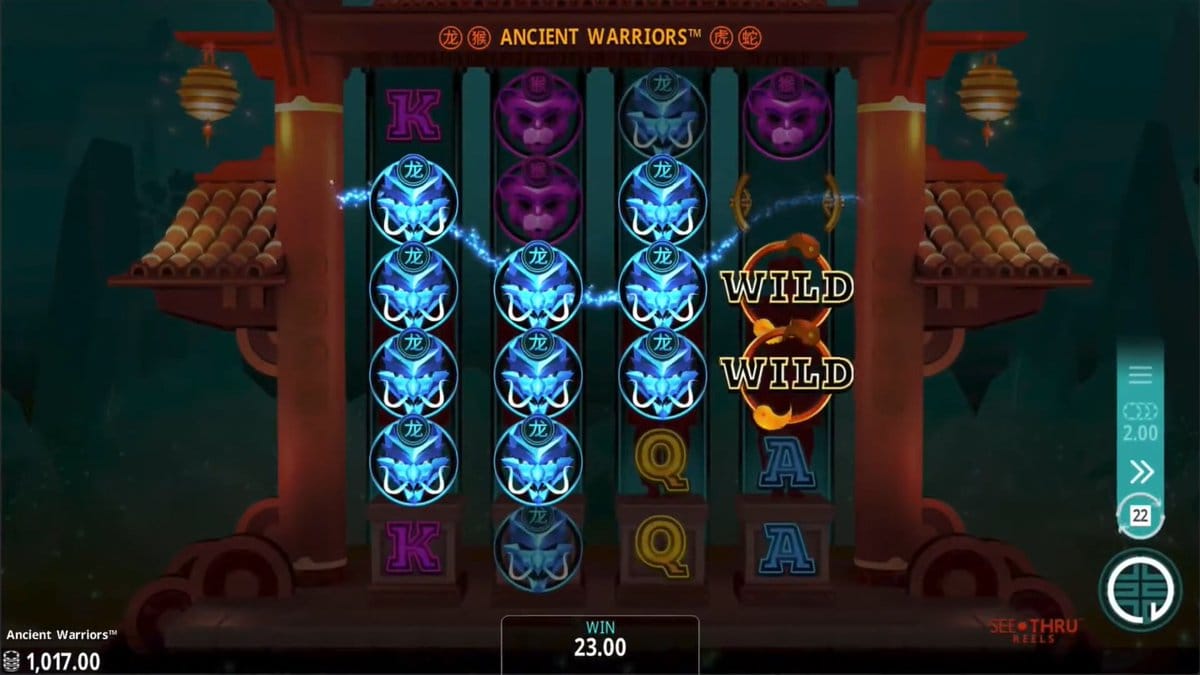 Feature symbols appearing in 3, 4, or 5 rows will activate this feature.

Once the feature is on, al the symbols are transformed into wild multipliers, awarding different values. The multiplier values are 2x, 3x, 4x, 5x, or 10x your stake, for you to create better winnings.

This feature is activated when you get at least 3 scatter symbols on the reels simultaneously. You are then awarded 5 initial free spins.

As the feature plays out, any wild that shows up turns sticky, maintaining its position throughout the feature. Getting additional scatter symbols will offer you extra free spins that can be up to 10 in total.

You could land the bonuses above when you play on Slots Racer any time.

Ancient Warriors boasts some alluring graphics, while the See-Thru Reels mechanics are supposed to have you high-spirited.

The features are quite impressive, but 1,807 times wager maximum payout relegates the game to simple and medium rollers. Regardless, you could the best the game has to offer when you play on Slots racer today, or try All Star Knockout slot instead.