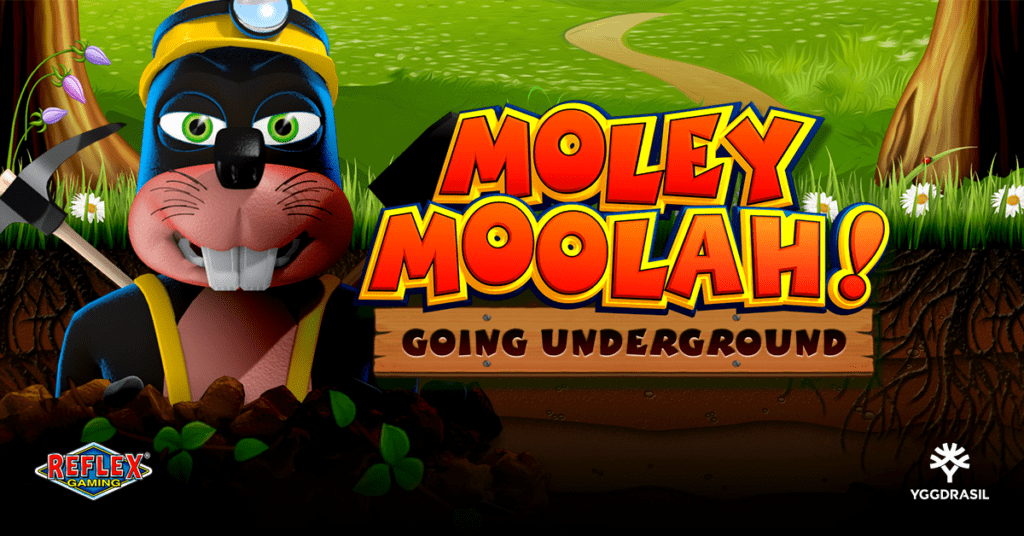 It’s time to go digging for riches in YGGDrasil’s Moley Moolah slots online. Grab a shovel and wait for the mole to appear to so you can collect acorns and swim in winnings.

This is retro free slot game aimed at fans of nostalgia. We had quite an opinion on Moley Moolah so keep reading to hear an honest review about it.

YGGDrasil Gaming is one of the best slot suppliers of online gaming solutions for iGaming operators. Birthed in 2013, they are responsible for some of the best online slot games the industry has to offer.

These magicians are responsible for scintillating slots like Victoria Wild and Jackpot Express. These are emblematic of their approach to online slots games, so they adequately demonstrate just how mesmerizing their gameplay experience often is.

Priding ourselves on being one of the best slot sites, you’ll see YGGDrasil’s excellent slots all over our website. 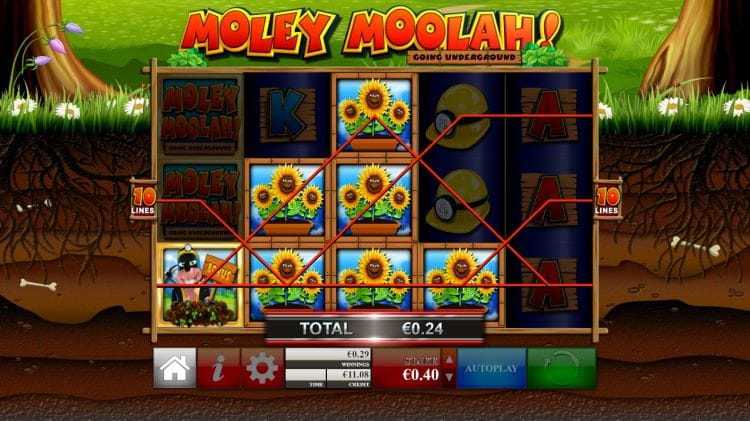 Moley Moolah is set in the quiet suburbs of Molesworth situated in England. The style is quite light-hearted, with cartoonesque graphics and animations. The colours are bright, bold, and well-executed. Even the soundtrack follows the same theme.

Moley Moolah is a 5x3 slot with 10 paylines. To form a winning combination, you’ll need 3 or more matching symbols from left to right starting from reel 1.

Moley Moolah’s symbols are as follows: low paying A to J symbols alongside a miner’s helmet, picks and shovels, sunflowers and a garden gnome. The highest paying symbol is the Moley Moolah logo, rewarding you 3, 10, or 50x your stake if you land 3-5 across a payline. 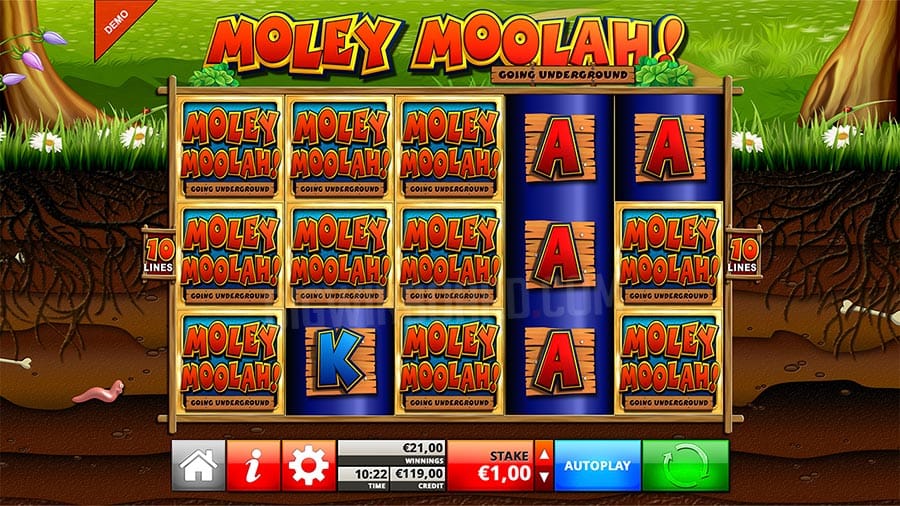 Moley Moolah’s a bonkas game, and the bonuses are no different. We’d first like to remind you of the game’s wilds: sticks of dynamite, and the mole. These will substitute themselves for other symbols so you can make winning combinations that were otherwise impossible.

Firstly, Moley Moolah has a ‘Wild Reels’ feature. Here, if an animated mole appears above the reels grappling a wild placard, the reels will vibrate, and an entire reel will become full of wilds! Multiple shakes mean multiple wild reels!

Beware though, occasionally you’ll get a false sense of the Wild Reels activating. It’ll be annoying, but at time the mole will appear but instead of causing an earthquake he’ll shake his head and decide to leave.

Secondly, Moley Moolah has a Free Spins feature. Land 3 of the mole on the same spin and it’ll trigger this feature, rewarding you with 12 free spins, played on a single set of 5 reel, 3 row, 10 payline reels.

In Moley Moolah’s Free Spins feature, there will be a new symbol: the golden acorn. Land one and it’s collected in a meter. Collect 5, 10, or 15 of them and more reel sets open up: 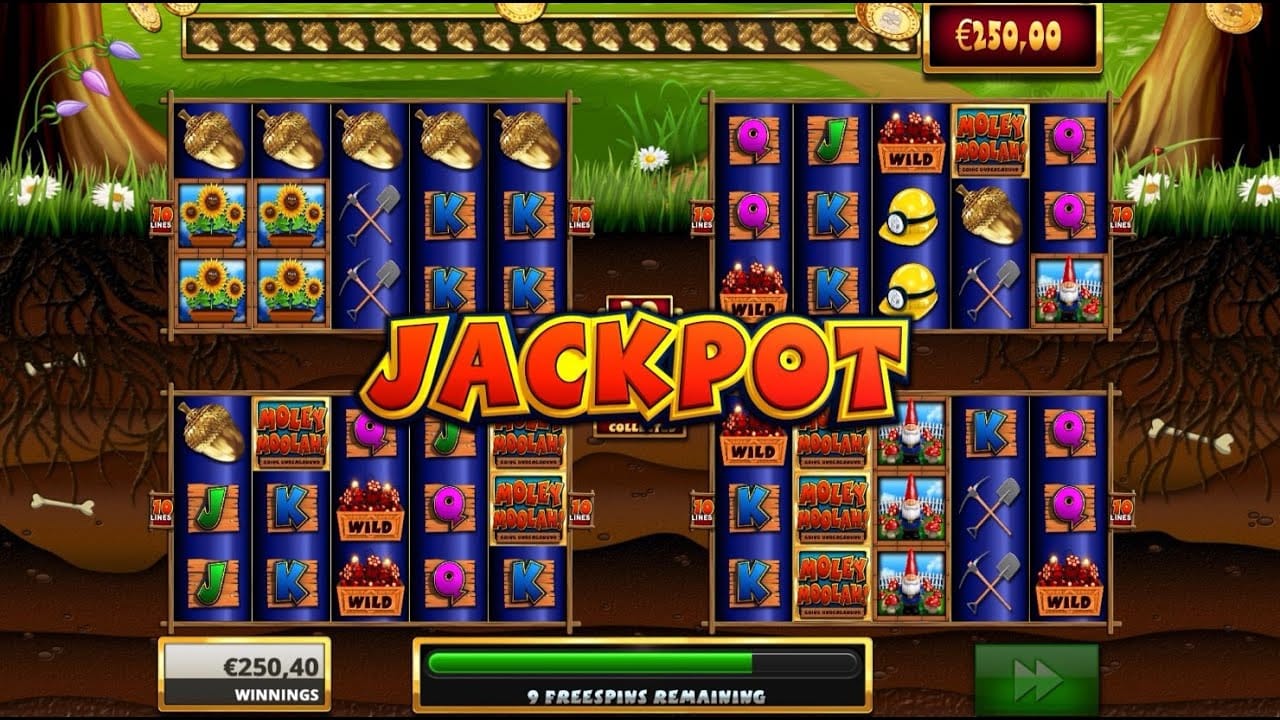 Moley Moolah leaves a lot to be desired. We find the base game to be quite underwhelming, and the graphics aren’t anything to go crazy over either.

The special features sound exciting but they’ll not often appear, even though they could perhaps add a layer of that missing entertainment. If you’re a fan of silly, slapstick games you may like this but, there isn’t too much here fan over so you might want to try Mega Wheel instead.