The geniuses that are NetEnt have presented us a wonderful videoslots in the form of Reel Rush, a slot game inspired by retro video games. It’s a visual aesthetic that pretty much everyone loves, but we just do not tend to see many slot games about, so finally NetEnt have filled the gap in the market.

The retro fruit theme and the platform style gameplay make Reel Rush slots online really absorbing to play, and the nostalgia attached to it is a very happy one. But under the surface, Reel Rush is a really great slot, too.

You can play it on all of your devices at the best slots games site of all, Slots Racer. While you’re there, you might as well make the most of one of the best slots welcome bonus offers in online casino, and win up to 500 free spins to play on another NetEnt classic, Starburst.

NetEnt - the Pioneers Behind Reel Rush

Other than perhaps Microgaming, NetEnt are just about the biggest in the game that is online casino. The Scandinavian giants can lay claim to some of the best online slots of all time, including the following:

Not only do NetEnt have some of the best slots pay by phone bill games, they also own some of the best online slots developers, including the likes of Red Tiger Gaming, who they acquired in 2019.

Formed back in 1996, these guys really are some of the originators of online slots, and we hope that their 24 year reign continues for much longer. They’ve already got some really interesting looking slots coming out soon, so keep an eye out for those. We’re sure they’ll be in amongst all the best slots at Slots Racer. 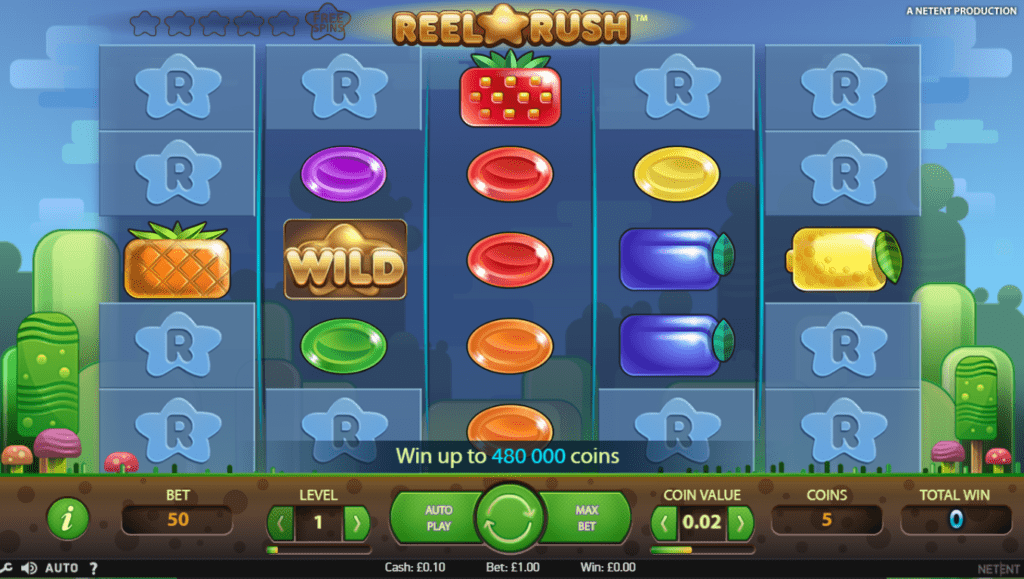 Right off the bat, Reel Rush appeals thanks to its awesome fruity platform game themed, but once you get into the stats of the slots it continues this. The RTP is well above average, coming in at 97%. That’s higher RTP than the majority of the best slots of the year so far, for sure.

Five reels give way to a wicked 3125 paylines, so you can be assured of a nice variety of ways to win when playing Reel Rush. You can access these paylines and reels on all of your devices from anywhere between 20p and £100 per spin.

In Reel Rush, there are a bunch of fruit themed symbols that you’re going to have to line up from left to right. As well as those standard symbols, Reel Rush has a wild that can land on any reel except for the first. The strawberry is the highest valued standard symbol, as landing five of these in a row will pay you a cool 1000 coins.

The best bit about all of Reel Rush, however, is the bonus features, of which there are quite a few… 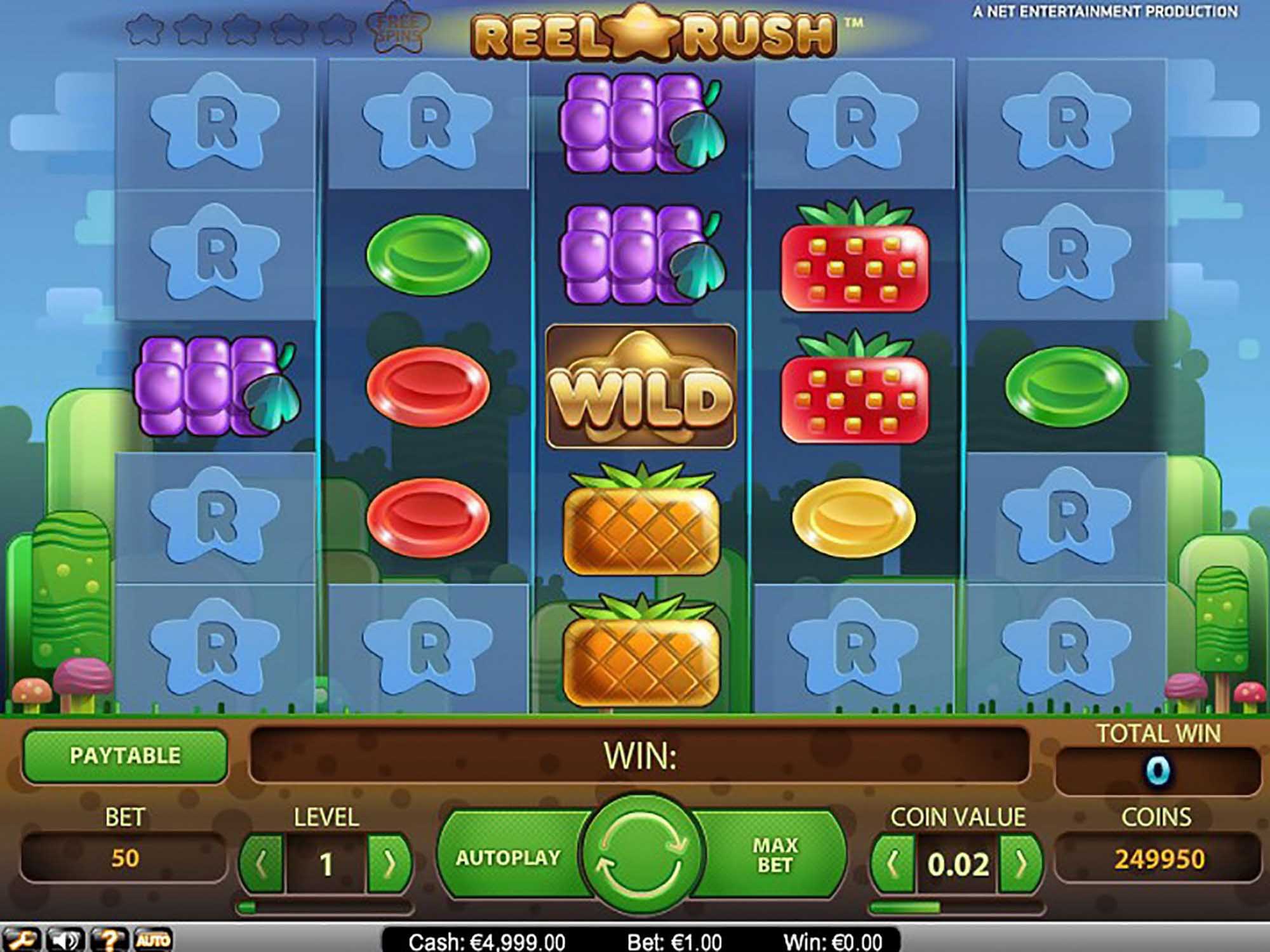 The free spins in Reel Rush are activated in an interesting way. Instead of the classic landing three scatters or free spins symbols in a row, that gets a little tiresome after a while, NetEnt have shaken it up a little bit.

Every time you land a win, you activate a re-spin. This is just one free spin. However, every time you get a re-spin, the amount of ways to win goes up, meaning that there is a higher chance of getting another win and therefore another re-spin. The chances increase each time, until the fifth time.

Land five wins a row, and you’ll get eight free spins handed to you. These come with the game’s maximum amount of ways to win attached to them, that 3125 that we talked about earlier on. 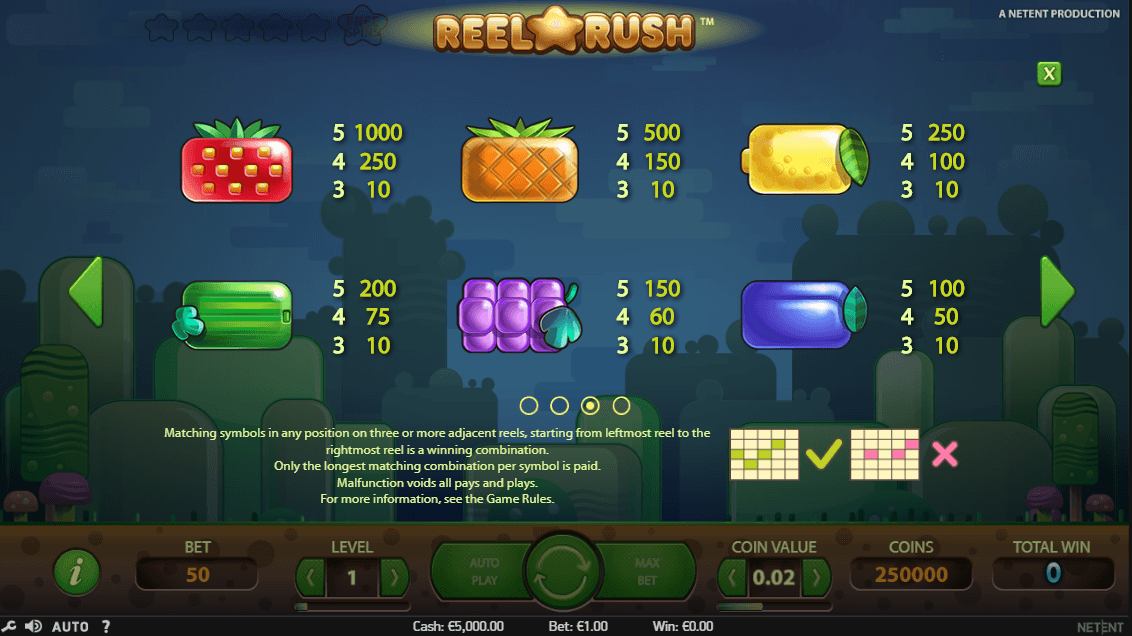 NetEnt have once again established themselves as one of, if not the best online slots developers in the world. You can play Reel Rush or the Reel King Mega slot at Slots Racer right now.