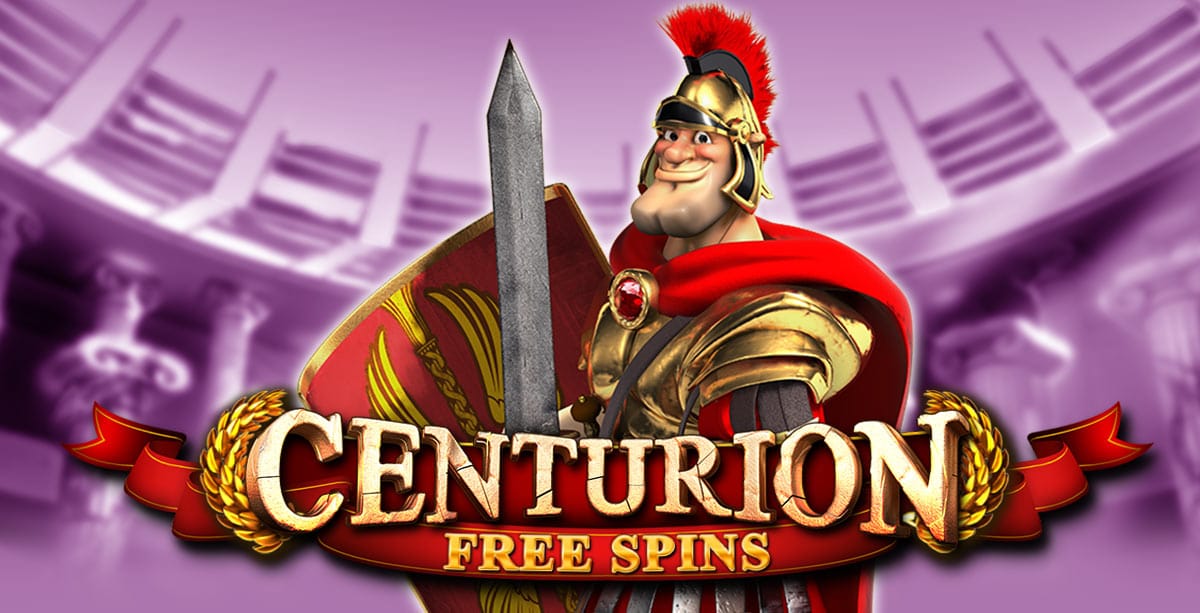 For all the history buffs out there, there is plenty of choice when you want to play video slots. Whether it be the Ancient Egyptians, or 4000 years later in 1920s New York City, some of the best online slots are geared towards periods of history, and with good reason.

The earlier version of this game, Centurion, was hugely successful and enjoyable to play, so to be presented with this free spins version was an exciting prospect, and one that did not disappoint.

Centurion Free Spins is widely regarded as dark horse-type developers Inspired Gaming’s has produced some of the best slot games since their formation in 2007, and in playing it we can certainly see why. It’s a beautifully presented Roman gladiator-type slot with indulging colours, eye-catching symbols and engaging music and sound effects.

What’s more, Centurion Free Spins is available on each and every device you may own, from your smartphone to your computer, so you can take it with you wherever you go or get stuck in in the comfort of your own home.

It’s a five reel slot with three rows full of cool Roman symbols, and there are 20 lines with as many ways to win. Centurion Free Spins isn’t the easiest game to win in the world but has good earning potential when it does come about, so it’s definitely worth a play here at Slots Racer where you can get 500 free spins when you sign up.

About Inspired Gaming - the Pioneers Behind Centurion Free Spins

The UK-based developers Inspired Gaming started small back in 2007, but three years later in 2010 they were bought out by a private equity fund which gave them the finances they need to really ramp up their games. And it paid off. Now, Inspired Gaming are making a real name for themselves in the UK & Italian markets, with a view to branching out further worldwide.

Inspired Gaming produce virtual sports and all sorts of online casino games, but of course, we’re here for the slots. With top slots such as Merlin, Jungle Bucks and Goddess of the Amazon slots game, you can play an Inspired Gaming slot safe in the knowledge that you’re in the hands of one of the best online slots developers in the business.

The cool thing about Inspired Gaming is that they allow each individual casino that they work with to set variables in the slots, such as the RTP and maximum stake. That’s why it’s important to opt for the best slot sites and Slots Racer is the way forward on this. 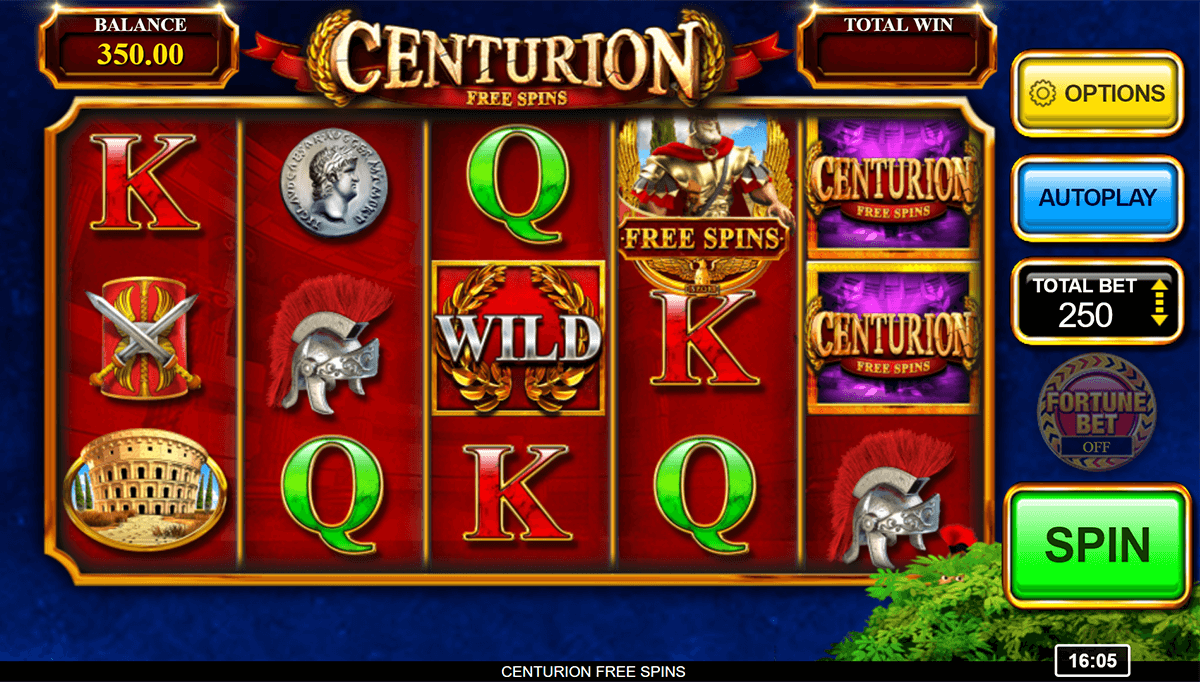 The layout of Centurion Free Spins pay by mobile slots is relatively simple - it’s a 5x3 using a conventional mechanism and the settings buttons are conveniently tucked away at the bottom of the screen so as not to intrude on your gameplay.

Spin the reels and try to line up a wealth of Roman-themed icons including gold coins, gold statues, riders and legionnaires, all corresponding to different wins. The most important symbol to look for is the game logo Centurion, which pays the highest reward when landed two to five times. The chariot and coliseum come joint second, followed by the sword and shield.

While this is satisfying to play in itself, the real excitement of the Centurion slot, other than its aesthetics, comes in the form of a few cool bonus features and free spins. 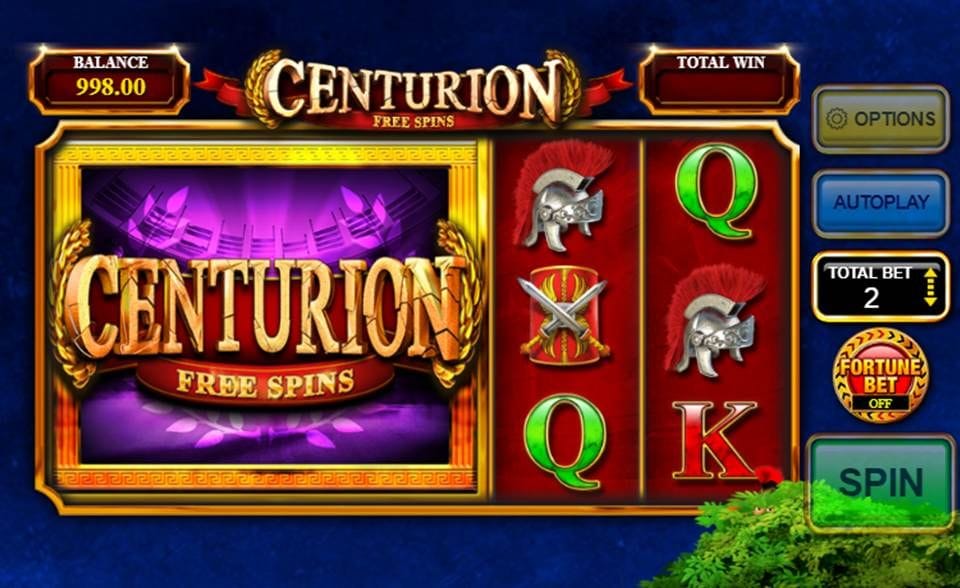 You’ll also see the wild symbol which plays a traditional role of being able to replace any symbol in the reels to help you win, and in the free spins bonus rounds, this comes in abundance meaning the winning potential is particularly potent here.

The extra bonus features in Centurion Free Spins are the ‘Big Win’ bonus, an exponentially bigger win from landing the Centurion symbol; the Super Bonus Reels, increasing the amount of free spins bonus symbols and therefore increasing the chance of a payout; Reelus Maximus, whereby one symbol can cover three reels and Five of a Kind which can multiply your already large win by up to seven.

For more slots in this series, check out the Centurion Maximus Payus slot. 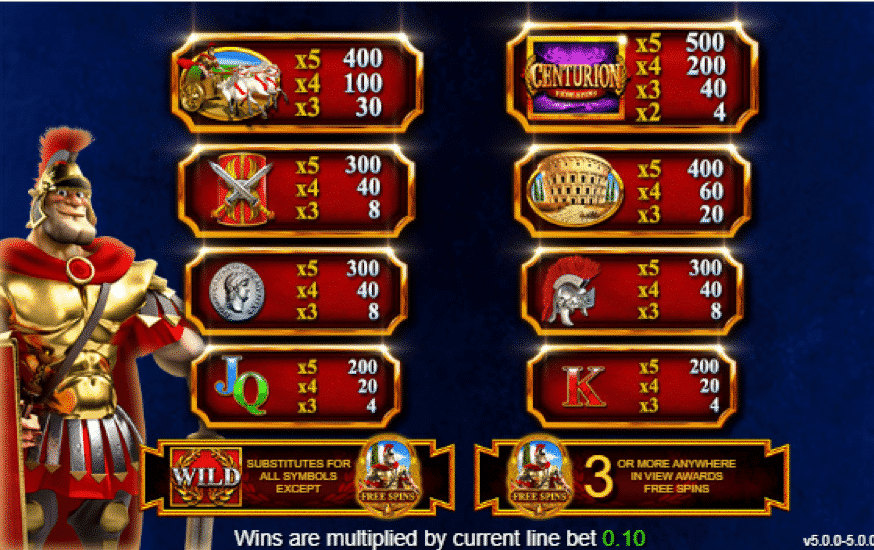 Centurion Free Spins goes down as one of the best online slots in the historically themed domain that we’ve played in recent years, and this comes down to it’s engaging playability through graphics and sound, as well as the abundance of cool features that make the winning that little bit more fun.

You can check out a free version if you’re not 100% sold already, then get playing for real money at Slots Racer when you’ve had a taste, and if you are hungry for more, why not try your luck on some of our jackpot slots, like Caravan to Cairo Jackpot.