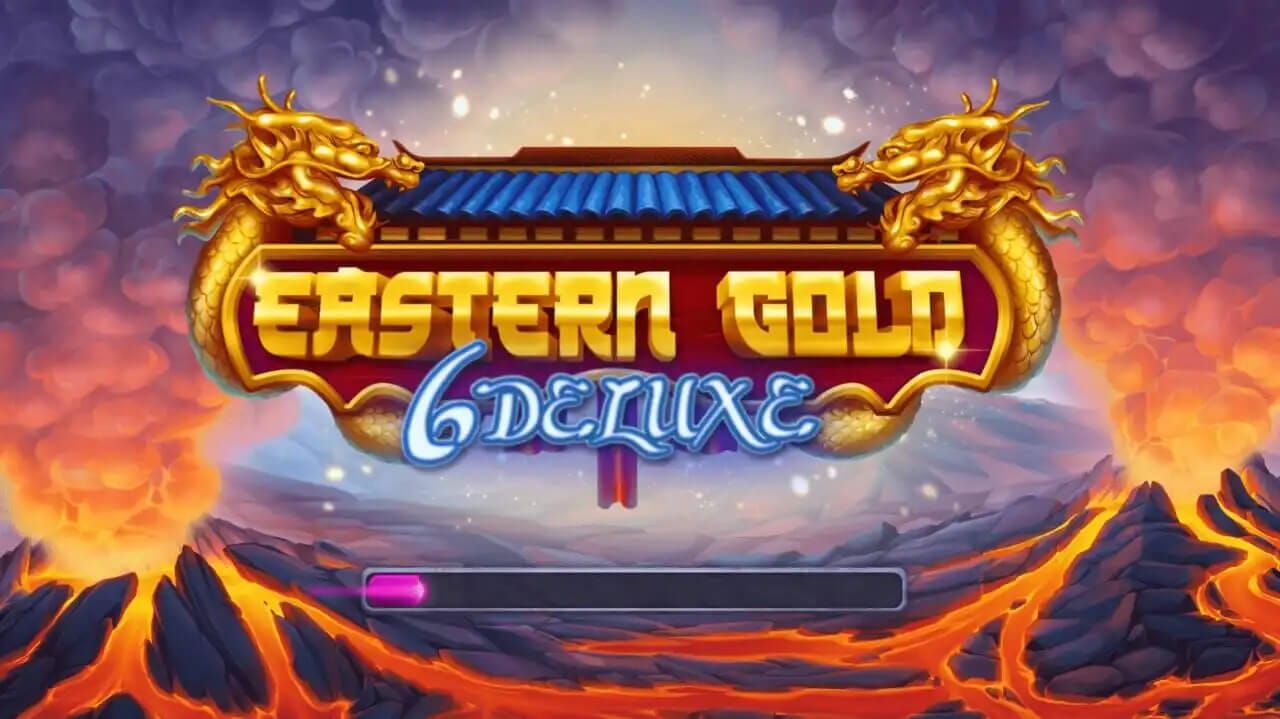 Slots developers are fond of giving their games a Chinese theme, and Gamevy’s have contributed to the Eastern Gold Deluxe slot genre. This game is played on a 6X3 grid with five paylines, and it has an RTP of 95%. You can bet from 5p up to £20 per spin, and the top prize on offer is 5000 coins. Although the game has low to medium volatility, plenty of thrills are provided by the free spins feature, and some giant symbols are lurking around the reels. Read on to find out what else I can tell you about the Eastern Gold Deluxe game.

This Eastern Gold Deluxe graphics reflect the game's Chinese theme. There are rich shades of blue and gold on the screen, with the reels set on the side of a pagoda. A richly detailed mountain scene provides the backdrop to the reels, and the beautifully rendered evening sky certainly helps create an immersive atmosphere for players. I like the way that the game looked.

The higher value symbols on the reels in the Eastern Gold deluxe slots game are all associated with the game’s Chinese theme somehow. You will see a Koi carp, a Chinese emperor and a lantern used in the game. The lower value symbols are the typical range of numbers and letters used in many slots UK online, only given a suitably Chinese twist to their design. Interestingly, there is no wild symbol used in the Eastern Gold Deluxe slot. The scatter symbol is a suitably golden dragon. I played the game on my phone, and I found that the Eastern Gold deluxe mobile graphics were every bit as good as they were when I tried the game on my desktop computer.

How to Play the Eastern Gold Deluxe Slot Game

Those readers who want to try the Eastern Gold deluxe slot for themselves first need to open an account at an online casino. Slots Racer is a good choice. I opened an account there by following this process.

The next step towards playing the Eastern Gold Deluxe slot is to find the game on the Slots Racer lobby page. This page is the part of the website where all the games are displayed. Once you have found the game, click on it to open it up and follow these steps.

Like many other slots gamers out there, I like to know a few hard facts and figures about a slot before I try it for myself. If you’re anything like me, you’ll be interested in reading these important details about the Eastern Gold Deluxe slot.

I found that I could set my bet levels from 5p to £20 per spin when playing the Eastern Gold Deluxe slot. The slot’s action unfolds on a 6x3 grid with five paylines, and the top prize you can win is 5000 coins. Gamevy has made the Eastern Gold Deluxe slot low to medium volatility, meaning that I enjoyed plenty of smaller wins but found the bigger wins harder to come by. The free spins feature is very entertaining, and there are also chances to win bigger prizes thanks to the presence of a jackpot prize and some giant symbols.

*All of the above values are subject to change at anytime.

As I mentioned above, there are three bonus features in the Eastern Gold Deluxe slot. You can read about them here.

Free Spins: The main bonus feature in the Eastern Gold Deluxe slot is the free spins game. This is triggered when at least three Golden Dragon symbols appear anywhere on the reels. The number of spins that you receive depends on the number of dragon scatters that appear. For three scatters, you'll receive 10 spins, and for four scatters, you'll get 15. For five scatters appearing, you'll receive 20 spins, and for six scatters, you will be awarded 25 spins. During the spins, some of the symbols on the reels will be larger than usual. I'll explain how this works next.

Giant Symbols: When the free spins take place, one symbol on the reels on the reels is selected at random to expand in size during each spin. The selected symbol appears on the middle reel and takes up a 3x3 space. I found that the presence of this symbol on the reels significantly increased my chances of winning bigger prizes.

Jackpot: When the reels are spinning during the base game, you should watch out for symbols framed in gold or adorned with golden sparkles. Every time one of these symbols appears, it fills a meter on the screen. If you manage to fill the meter, you can win the top jackpot prize of 5000 coins. However, the meter is reset during every spin, so you need to be patient if your prime quest is to capture the Eastern Gold Deluxe slot's top prize.

Should You Play the Eastern Gold Deluxe Slot?

The Eastern Gold Deluxe slot is an entertaining game that should appeal to both novices and more seasoned slots gamers. My overall rating for the game is 7/10. The Eastern Gold Deluxe graphics are pretty good, and the free spins feature is entertaining. I also enjoyed the extra thrills provided by the hunt for the jackpot prize, even though I came nowhere near winning it. I would certainly recommend that you head over to Slots Racer and try the game for yourself soon!

If you’re up for other amazing games, we recommend you check out Easter Island 2. There are also other slots similar to Eastern Gold Deluxe, such as: