It’s small, with only three reels and three rows, and that kind of suits the cute cartoon theme of the game and makes it much more accessible for the entry level player. That being said, though, it does have a medium level of volatility, so proceed with caution if you’re a first timer!

With only nine paylines and the ability to play from as little as a penny per spin, this is a nice and simple, no frills but plenty of fun slot, just how we like ‘em from EyeCon. The RTP is a pretty average 95.1% too, so nothing to complain about in that sense.

You can play Fiddle Dee Dough, amongst many more of EyeCon’s new slot machines in the market, including Slots Racer!

Some of the most hard working developers in the game, Australian developer EyeCon seem to have their name attached to every other slot promotions in the market right now. And for good reason, too. They’re simply one of the best online slot developers in the world!

Formed in 1997, the Brisbane-based team initially produced video games, with no gambling involved (!), then in 1999 they breached the then slightly mysterious world of the online casino. It wasn’t till 2003, however, that they found their true calling in the form of slots, and since they have gone on to produce some of the absolute best online slots one can play.

Although EyeCon are probably most famous for their production of the world famous Fluffy franchise (including Fluffy Favourites, Fluffy in Space and Fluffy Too Jackpot), they have also produced other top slots including Beat the Bobbies (plus its sequel Beat the Bobbies at the Tower of London), Very Merry Christmas and Secret Garden II. In fact, EyeCon currently have hundreds of top slots under their belts, and you can play tonnes of them at the best slots sites, including Slots Racer.

Famous for their cute, cartoon graphic style, funky soundtracks and generous helpings of free spins in the majority of their slots, EyeCon are really gunning to become the best slot developer in the world. They can’t be far off, right? 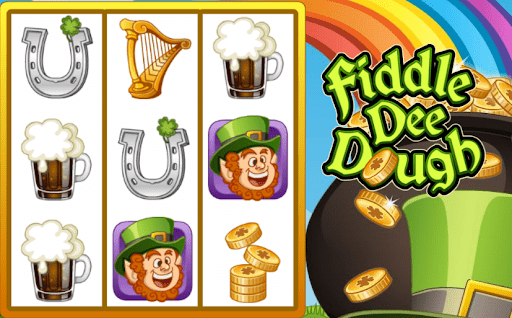 As previously mentioned, there isn’t a whole tonne to say about the gameplay in EyeCon’s Fiddle Dee Dough slot game. It’s only a 3x3 setup, which makes it nice and simple to engage with if you’re not the type to overcomplicate things. The symbols themselves are a mixture of Irish characters and charmed, and are presented in that pretty cartoon style that we know and love EyeCon for. 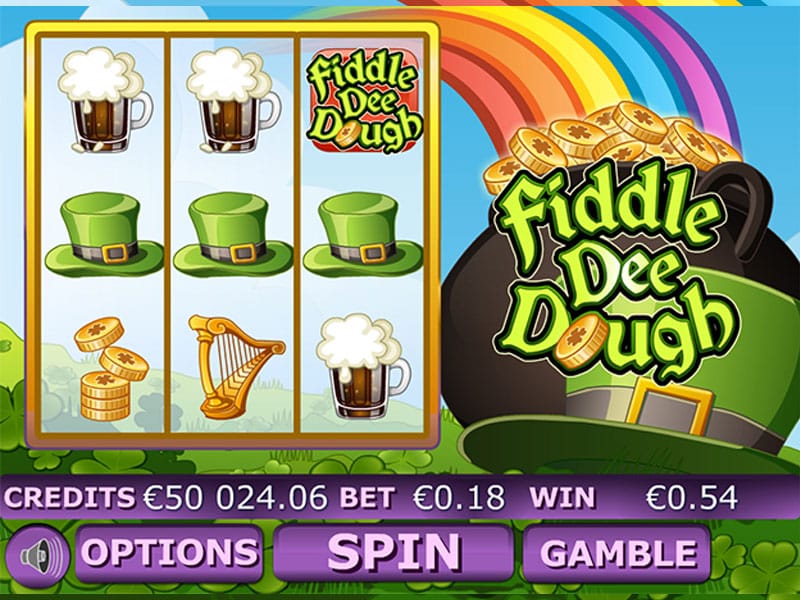 As with most of EyeCon’s pay by mobile casino games, the real fun comes in the form of bonuses and free spins, which Fiddle Dee Dough does not let us down on. Pay attention to the Leprechaun (of course!) in Fiddle Dee Dough as he presents himself as the scatter here. If he shows up three times in any one spin (anywhere on the reels), you’ll be entitled to a reasonably generous 8 free spins.

On top of this, those free spins can be triggered a healthy 15 times, and the overall winnings will be tripled! A word to the wise: this is probably the best way to make some money in Fiddle Dee Dough, so keep your fingers crossed and your four-leaf clover close to hand in the hope to see a few leprechauns light up your reels.

Another scatter in this slot is the pot of gold which, although rarer, will activate the prize pick feature if three are seen. Here, you choose the prize, with a maximum on offer of a whopping 111x your stake! Just another reason EyeCon’s bonuses make their games some of the best slots available. 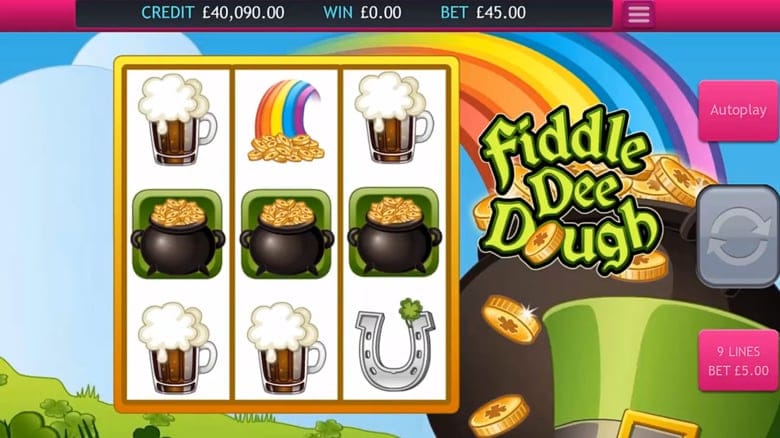 An Irish-themed slot is always a favourite amongst punters of all varieties - maybe it’s down to the aesthetics, or maybe it’s something to do with that lucky feeling you get looking at leprechauns and four-leaf clovers while you spin the reel.

Whatever it is, we’re hear for it and are sure you will be too! You can try and strike up some of that luck at all of the best slot sites like Enchanted Prince Jackpot, particularly at Slots Racer.