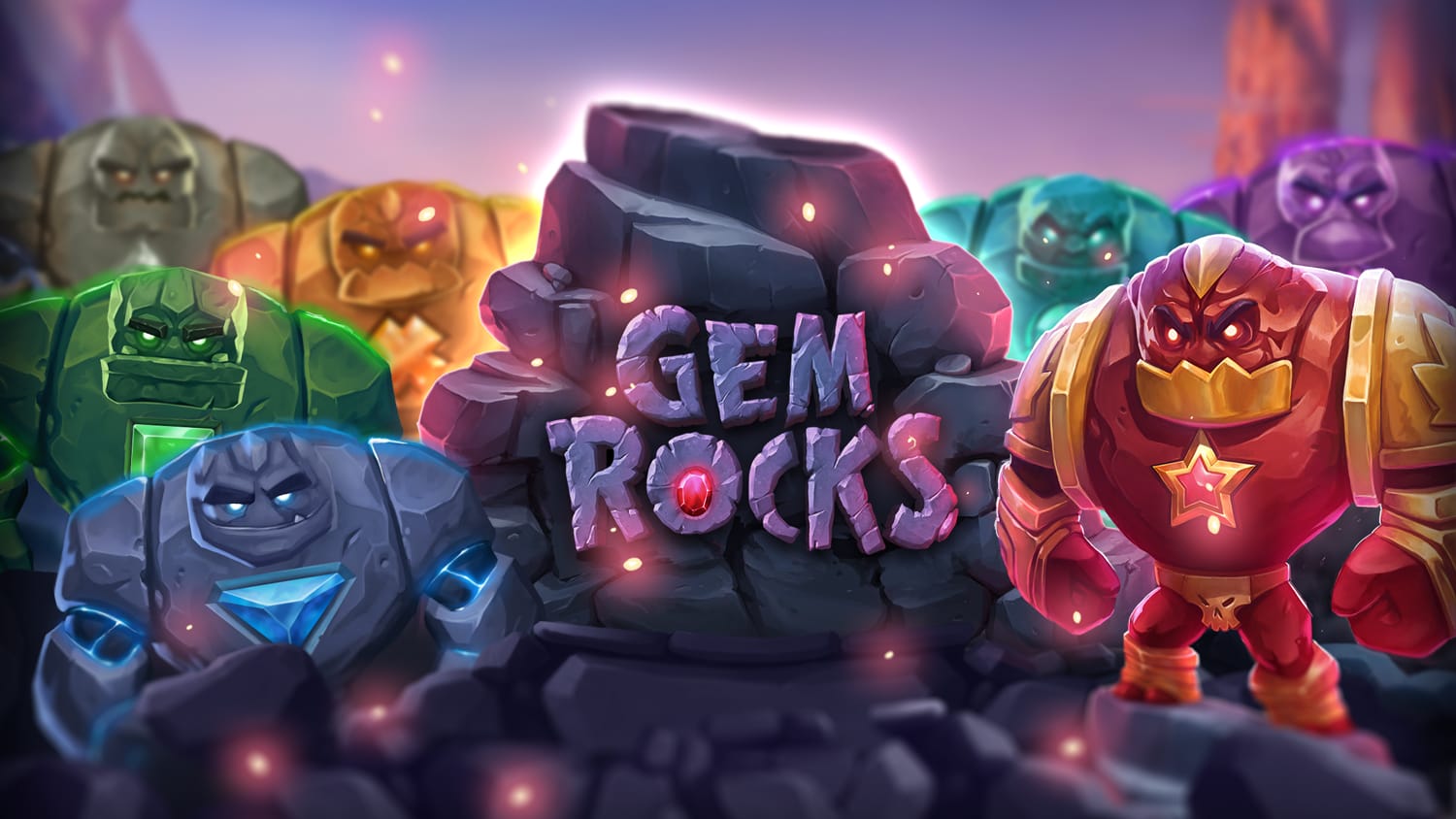 Welcome to the world of Gem Rocks from developer Yggdrasil Gaming, a slot that isn’t like all the rest, a slot that demands respect if you’re going to step up! Yggdrasil Gaming is known across the online slots spectrum as a dev that likes to take chances, experimenting with every slot they produce — consider Gem Rocks their Magnum Opus. Have you ever heard of a cluster slot before? No, well, you do now and you can play it on racer!

Gem Rocks is a 6 reel slot games that comes with over 4,000 ways of winning (4,096 to be specific). One can spin here from as little as 25p up to £100 depending on how the player likes to spin — of course, in Gem Rocks the fortunes favour the bold, keep that in mind… Be sure to check out the rest of the review below to learn more about this rocky road of a mobile slot from developer Yggdrasil Gaming!

Discover more about these unique slot games through our complete review below, or try any of these award-winning videoslots today on SlotsRacer.com:

Malta-based developer Yggdrasil is known by many as a developer that likes to take chances — just look at Gem Rocks if you want to see that in practice. We personally enjoy playing online casino slots that are ‘different’, and there’s only so many fruit slots you can play before going loco. Slots like Gem Rocks are the reason why these guys are held in such high regard!

The company opened their digital doors all the way back in 2013 and have only grown exponentially as time has gone on, finding new footing in various new markets that had otherwise gone without previous! Their logo is almost as distinct as the slots/casino games they produce, a tree that looks just as rich as the last time we laid eyes on it spinning one of their games!

And many, many more casino slots that you can try with our slots promotions!

First and foremost, let’s go over what on earth a cluster slot is before we start dissecting it properly for you newbies out there! Like Aloha Cluster Pays from NetEnt, Gem Rocks is a slot that involves mashing symbols together in clusters rather than matching them in the same left to the right orientation you might be used to. Cluster slots allow you to string wins together both horizontally as well as vertically, meaning you have plenty of ways to come out on top versus a more lateral layout! And not only that, you can even it play it on a paypal casino!

Cluster slots can get a little getting used to, which is why we’d recommend you spin on a low amount — alternatively, you could utilise the autoplay mode to see how the reels move once a bet has been set down. Once you are feeling comfortable is when you should be raising your bets to reach for the higher amounts. You place your bets at the start of every round — like in any slot — when ready, simply hit the spin and watch these rocks tumble!

Gem Rocks is a video slot, meaning it operates on some of the most up-to-date tech out right now! We expected nothing less from a developer like Yggdrasil Gaming! Gem Rocks can get pretty hectic at times, so we made sure to test how durable this slot is — we can happily report that it held up and not once did it stutter despite all the action on the board!

Set on a rocky mountain, Gem Rocks is a slot that is easily identifiable from afar. The colours utilised here — not to mention the overall design of the symbols — have been expertly executed to bring you something different! Every icon you see on the reels will feature a different shape/colour of some kind. Every icon offers something different depending on how many symbols you’ve smashed into a cluster, as well as the icon itself! 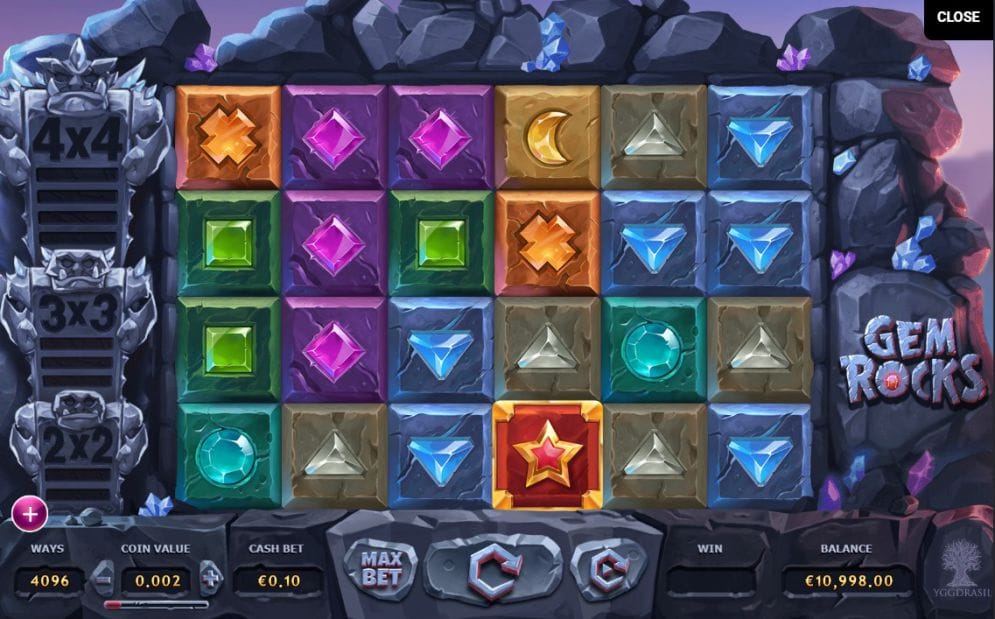 Any win will trigger a dropdown wins feature, this feature will cause even more ruckus, and you do nothing for the most part when it’s activated! Gem Rocks can be an incredibly fast slot when it wants to be, especially when one has triggered this dropdown feature as new icons will be flooding the reels every few moments. This dropdown feature is completely random but definitely helpful in making you some serious money — especially if you’re playing on the high bet amounts.

We should mention the Gem Rocks feature since we’re on the topic of making big money. To trigger this slots feature, you will need to get between two and nine consecutive dropdown wins — look at the meter presented on screen if you are wondering how close you are. Once triggered, a single Gem rock will appear on the reels that are identical to other icons around it, thus forming a big ol’ cluster right there and then! Here’s what you can net:

If you can successfully get those nine consecutive wins, then you are pretty much set, and a high score is all but guaranteed. Gem Rocks is full of hidden little trinkets like this that add to the slot every time you pick it up to play. We can’t think about a single thing here that doesn’t excite — cluster slot fans, this one is definitely for you, trust us! Play these mobile slots and many more on Slots Racer today!

The Verdict on Gem Rocks

It’s hard not to look for holes when you hear about an online slot that is said to be incredible, but Gem Rocks certainly does a good job in hiding them if there are any! Yggdrasil Gaming is one of the very best going right now in terms of developers, so it comes as no surprise to us that Gem Rocks is a success story for these guys. Fans of Vikings Go Berserk and Valley of the Gods should definitely check this one out for all of the reasons listed above. If you don't fancy this game though, we offer other amazing casino slots like Rainbow Riches free!