Gonzo’s Quest by NetEnt is a 5 reel 20 pay-line casino slot games with a Mayan theme. This slot is centred on multipliers. In the Avalanche Reels, players can end up with a 5x multiplier applied on every winning combination. In the Free Falls Bonus feature, players can receive multipliers of up to 15x for any consecutive wins on the reels and/or avalanches.

Gonzo’s Quest is one the best online slots from NetEnt's first-ever platinum releases which makes it a must-play slot for all casino slot lovers out there. Stakes start from 20p to £50 a spin on all iOS and Android PC, tablet and smartphone devices. Enjoy this article? Then read our Guns N Roses slot review too or play one of the top video slots desktop below:

If you’re feeling in the mood to go on an adventure, it may be time to go searching for El Dorado, the lost city of gold. Gonzo’s Quest tells the story of conquistador Gonzalo Pizarro (Gonzo) whose mission is to traverse the Amazonian jungle in the hopes of finding El Dorado, the lost city of gold. The slot is way ahead of its time. You’d easily mistake it for a few months old release when in reality, it was released in 2011.

The question mark symbol acts as the wild and is able to substitute all other symbols to form a winning combination. Gonzo also sits on either side of the reels, ready to become animated whenever a winning combination is formed. He starts to dance around and you’ll even see him moonwalk if you’re lucky.

Try PayPal slots like this one on Slots Racer today! Bonuses and Extra Features on this Online Slot: Avalance & Free Falls with Multipliers

If you land 4 consecutive avalanches, your multiplier value can rise up to 15x. In addition, you can win extra free spins when 3 more scatters appear on the reels. The result is 10 extra free spins which brings your total to 20 free spins. Find more casino and slot promotions on Slots Racer! 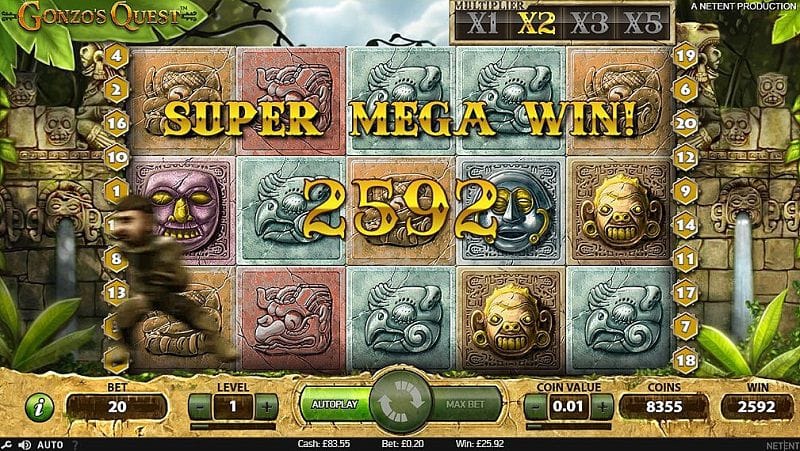 About the Developer of the Gonzos Quest Slot Games - Net Ent

In addition to the casino software, they also own a live dealer casino platform and a mobile gambling platform. They also own a progressive jackpot network that has rewarded payouts of over tens of millions worth of prize money.

NetEnt has a public listing on the Stockholm exchange. When the company was started, they used to a few online casinos, but later sold all of them in 2005. In 2006 they were voted top casino module. The company has continued to grow to become number one in the world. NetEnt is licensed to operate in Malta and has a fully verified casino module that is cleared for randomness by independent third-party companies in Canada and Sweden.

What started from humble beginnings is now the most sought after slot developer. NetEnt has managed to overtake casino slot developer giants like IGT, Microgaming and Novomatic. NetEnt slots are especially huge in the Nordics, the UK and most of Europe. They’ve also managed to enter regulated markets like New Jersey, in the USA. You can find their online slots in a variety of online casinos. These include 3 reel, 5 reel and multiple ways to win slots.

Other Games by NetEnt that you can join and slots you can pay by phone bill include:

Final Review of the Gonzo's Quest Slots - Hit or Miss?

NetEnt Gonzo’s Quest has clearly stood the test of time. For the best online slots that was released in 2011, it still manages to capture player’s hearts all over the world. Gonzo’s Quest is a cult favourite offering amazing gameplay, high-quality graphics and cool 3D animations with loads of win potential.

The bonus features in the game are superb. They can transform your bankroll instantly or at least have you walking away with a small profit. It’s possible for players to win over 37,500x your stake thanks to the 15x multiplier.

The Gonzo’s Quest slot game has its variance in the middle. It offers players wins of up to 2,500x your stake if you can manage to fill all the reels with high-value symbols during each base game spin starting off from a 1x multiplier.

If you add in the potential 15x multiplier that can be triggered in the Free Falls feature, you end up landing a massive 37,500x your stake a free spin/fall. All you need is to get ready to rush in and grab that Aztec gold. If you enjoyed this game why not also check out Aloha slot?