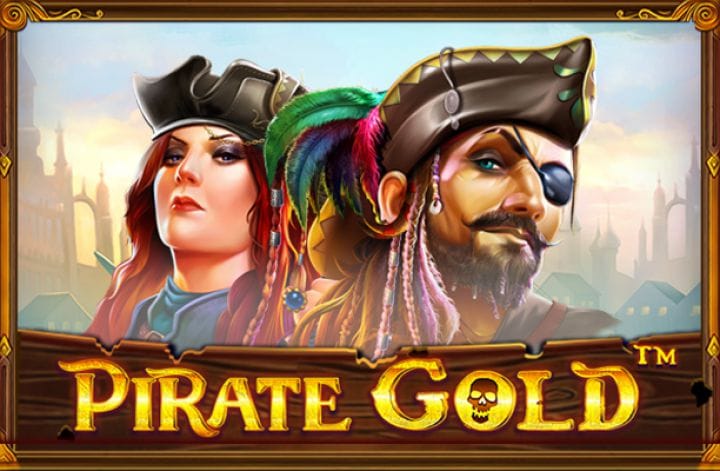 Pirate Gold by Pragmatic Play is a 5 reel, 40 payline slot game. Features in this slot include multipliers of up to 5x, free spins, 2 additional wilds, streak re-spins and jackpot prizes. Stakes starts from 40p to £200 a spin on all iOS and Android devices. Also, don't miss out our slots offers, which are made just for you. Read more on this casino slot below, or just play now one of these free video slots:

The visuals on display in Pirate Gold are well done compared to most online casino slot games at Slots Racer. The action is set in a misty harbour in the background with symbols on the reels including card values a telescope,  gold, bronze, and silver coins, a hook hand, a treasure map, a parrot and a ship. The male and female pirates pay the highest value. When 5 of these land on a payline, you’ll win 12.5x your total bet. The treasure chest acts as the wild. It can substitute all the other symbols except the scatter and lands on any of the reels except the 1st reel.

You can also land Minor and Major jackpots which pay 50x to 200x your stake respectively. If you fill all the 20 positions on the reels with money bags, you’ll win the Grand Jackpot which pays 1,000x your total bet. Deposit now and play on this paypal casino uk!

Pragmatic Play started out in the online gambling industry in August 2015. The company is considered one of the fastest growing suppliers of online casino slots. They've got a team of over 100 highly-skilled professionals who create the company’s incredible games from the main headquarters in Sliema, Malta.

Pragmatic Play has won several awards starting off with the Software Rising Star award in 2017 won at the EGR B2B Awards. Later on in 2017 they walked away with the Best HR Director, Best Gamified Experience Company and Best Digital Company of the Year awards all at the Malta iGaming Excellence Awards. Their online slots 2021 have different themes and modes of gameplay with a few examples including;

And many, many more of their mobile deposits casino games at Racer!

There are loads of pirate adventure themed slots out there and Pirate Gold is one of the best one. It serves up amazing visuals and exciting bonus features that offer some good winning potential. The slot does have a high variance, but if you’re lucky you can walk away with win of over 32,000x your bet. If you enjoyed this game, then you should definetely check out Bear Money Slot.