Here at Slots Racer, we love a good Playson slot, and Rise of Egypt is exactly that, so stick around to read out video slots review. It’s pretty simple in terms of its reel mechanics, as is the case with the majority of Playson slots, and that is characterised by the standard five reels by three rows and just the 20 paylines.

However, there are still a couple of cool bonus features thrown in there as well which we always love to see, and they, like the rest of the best slots game, are presented with lush graphics in an Ancient Egyptian theme.

While the theme of Ancient Egypt is pretty oversaturated, we think that of all of the slots within there, Playson have made one that stands out for the crowd. It’s not one of the best online slots game in the world, but it ticks all of the boxes and it is a lot of fun to play.

The best slots are available to play at the best slots site, of course, and that is Slots Racer - your first choice to play Rise of Egypt.

Playson - the Pioneers Behind Rise of Egypt Slots

Playson have been in the game for quite some time and we hope they stick around for a while longer as well, as their unique slots are a lot of fun to play more often than not. If you want to check some of the best Playson slot games out then you can do just that at the best slots site, none other than Slots Racer. 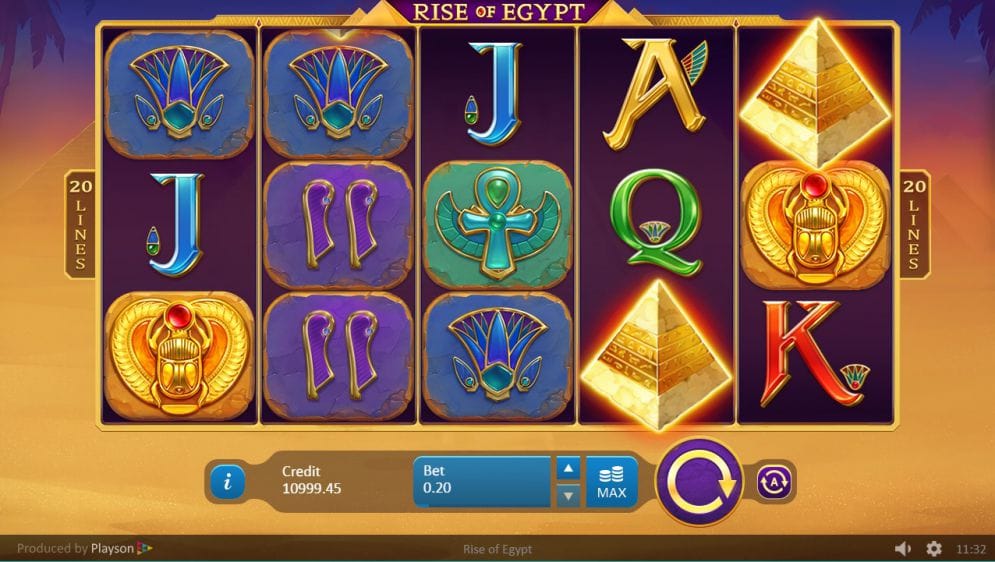 Again, Rise of Egypt is quite a simple slot game and the base game is quite traditional in that sense. It’s a medium volatility slot, which means that the wins come reasonably regularly and they pay quite nicely too. The jackpot of 944x your stake isn’t enormous, but the symbols in the base game pay out quite nicely.

To win cash without any bonus features activated, you’ll need to land symbols from left to right, and these are made up of the lower valued Royals from J through to A.

After this, you’ve got the Egyptian game themed symbols representing those higher values, and these are the ones you are going to want to look out for. The best of these is the scarab beetle in gold, as landing five of these in a row will earn you a pretty tasty 20 times your stake. Just the three of these guys will still get you a decent 5x your stake.

That is, except for the scatter, which takes the form of a pyramid. Five of these will not only earn you a wicked 50x your stake, but will also unlock one of Rise of Egypt’s slot bonus features. 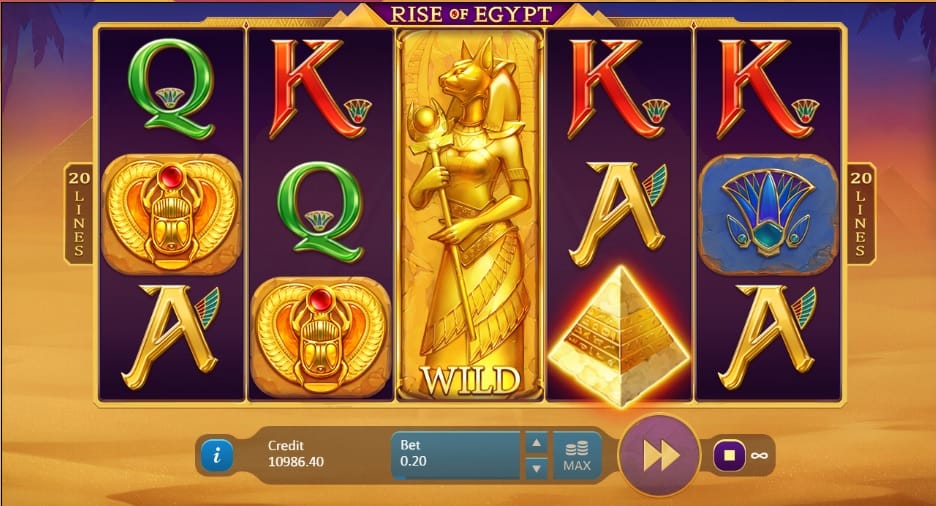 Bonus Features and Free Spins in Rise of Egypt

Those scatters will also earn you a nice 12 free spins, all of which come with expanding wilds meaning that the likelihood of landing a win during the free spins rounds are is much better than during the base game. Plus, every time you land one of said expanding wilds, you get another free spin, although this maxes out at a total of 35.

Rise of Egypt probably could use one or two more bonus features in order for it to compete with the very best online slots right now, and perhaps we would have likely a slightly higher jackpot as well considering the medium variance nature of the game.

That being said, it’s very solid and well designed, and you can have plenty of fun playing it. So, if you feel like it sounds like the right slot for you, then why not check it out at Slots Racer or give Rio Bingo a try?